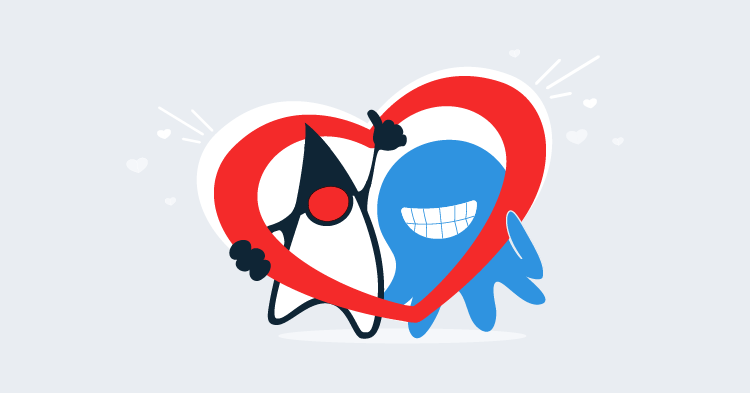 All of our code so far has been written in Java, and we have implemented design patterns like Page Object Model to increase the readability and maintainability of our code.

But at the end of the day, this code is still written in Java and few of the stakeholders who are interested in designing, testing and maintaining web applications will be Java experts. This means that no matter how clean and well designed our code is, it will never be something that non-developers can read and understand.

The Gherkin language has been designed to provide a natural dialect that describes the requirements, behaviors and interactions with a system. Gherkin uses a convention where all steps start with the words Given, When, Then, and And. An example of this is the steps:

This style is very readable even without any special understanding of the Gherkin language.

We want to take this ability to describe a system using natural language and apply it to WebDriver tests. This will allow us to write tests like:

These steps test a very similar scenario to those we have been testing in Java. Unlike Java code though, anyone can read this test and understand what it means. Better yet, with just a small amount of training anyone can write these tests as well.

For example, we may annotate a method to open up a given URL with the @And annotation:

But then reference it in a Gherkin step with the step prefix Given, like so:

Let’s break the regular expression assigned to the annotation down.

You can see that this match returned two groups. Group 0 in a regular expression always returns the complete string that was matched, which in our case is the full sentence I open the URL "http://google.com". Group 1 returns only the characters that were between the parentheses, which in this case was the URL http://google.com. 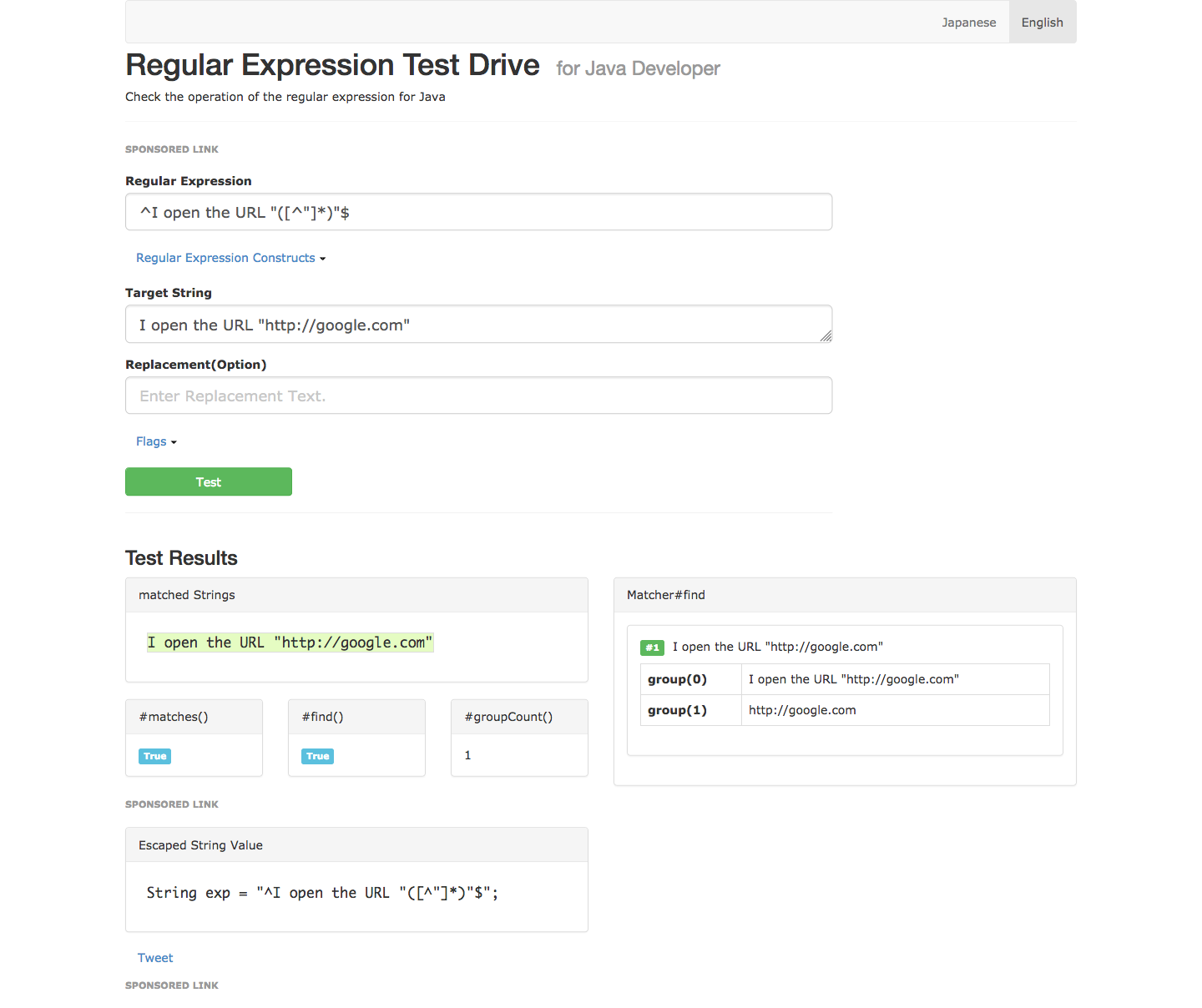 These regular expression groups are how Cucumber extracts data from a string and passes it to the associated method. In our case, the method takes a single string parameter. Cucumber will pass the value of group 1 to this first parameter.

So our task is to add the annotations @Given, @When, @And, and @Then to methods that will perform some useful work. The regular expressions assigned to the annotations define the Gherkin dialect that we can use to write tests with.

There are some important considerations when selecting a class to apply these annotations to.

The third is that when executing a method with a Cucumber annotation, Cucumber will manage the life-cycle of the class containing the method. This means that factories like AutomatedBrowserFactory will be bypassed when creating new instances of classes.

This leaves us in something of a bind. Given these restrictions, where can we apply the annotations?

At first glance we might be able to place the annotations on the WebDriverDecorator class, as this is where the majority of our functionality is defined. However, decorators are only useful when they are built in specific combinations. We have used the AutomatedBrowserFactory class to build these decorator combinations for us, but because Cucumber will take control of the lifecycle of annotated classes, it will bypass AutomatedBrowserFactory making our decorators useless.

The only other option is the AutomatedBrowserBase class, but this has been inherited by every decorator class, which is not supported by Cucumber.

Fortunately, there is a work around to the limitation Cucumber places on extending classes with annotations. You may have noticed that we placed the AutomatedBrowserBase class alone in its own package called com.octopus.decoratorbase. It may have seemed odd to have a package for a single class, but this was done quite deliberately. By isolating the AutomatedBrowserBase class in a package away from all the decorator classes that extend it, we can work around Cucumber’s limitations.

To see how this workaround works, let’s start by creating a test class that makes use of the code we included with the cucumber-junit Maven dependency.

This test class has two annotations that integrate it with the Cucumber library.

The first is the @RunWith annotation. This JUnit annotation accepts a class that can be used to modify how the test is run. In this case the Cucumber class modifies the test to look for any *.feature files in the same package as the test class and execute them:

The second annotation is @CucumberOptions. This annotation is used to customize how Cucumber will run the *.feature files it finds. Here we have passed the package com.octopus.decoratorbase as containing "glue" classes. Glue classes are simply classes with the annotations @Given, @When, @And, or @Then.

Cucumber will catalogue the classes in this package, as well as any sub-packages. Glue classes found in and underneath this package must not extend one another.

What this means is that because the AutomatedBrowserBase class is the only class found in this package, Cucumber is satisfied that no illegal class hierarchies exist. It doesn’t matter that all the decorator classes under the com.octopus.decorators package extend the AutomatedBrowserBase class, because Cucumber is unaware of these decorator classes.

So by isolating the AutomatedBrowserBase class in its own package, we can then use it as a Cucumber glue class:

Let’s take a look at these two methods in more detail:

The annotation @Given("^I open the browser \"([^\"]*)\"$") attached to the openBrowser() method works the same way as the previous example of @And("^I open the URL \"([^\"]*)\"$"). The annotations @Given and @And are interchangeable. Typically @Given is used on methods that perform some kind of initialization or management functionality, but this is just a convention rather than a rule.

The regular expression assigned to the @Given annotation follows the same pattern of using the caret (^) and dollar ($) characters to bookend the expression, a literal match of the string I open the browser, and a non-greedy capture group inside quotes.

The value of the capture group is then passed to the parameter called browser:

This method is then responsible for calling the destroy() method on the AutomatedBrowser instance created by the openBrowser() method:

We now have enough to run a very simple Cucumber test. Create the following file under the src/test/resources/com/octopus directory called simpletest.feature.

The directory src/test/resources/com/octopus is where Maven places resources for the com.octopus package by default. Remember that we need to place this file in the same package as the test class for it to be found. The name of the file can be anything we want, but it must have the .feature extension to be recognized by Cucumber. 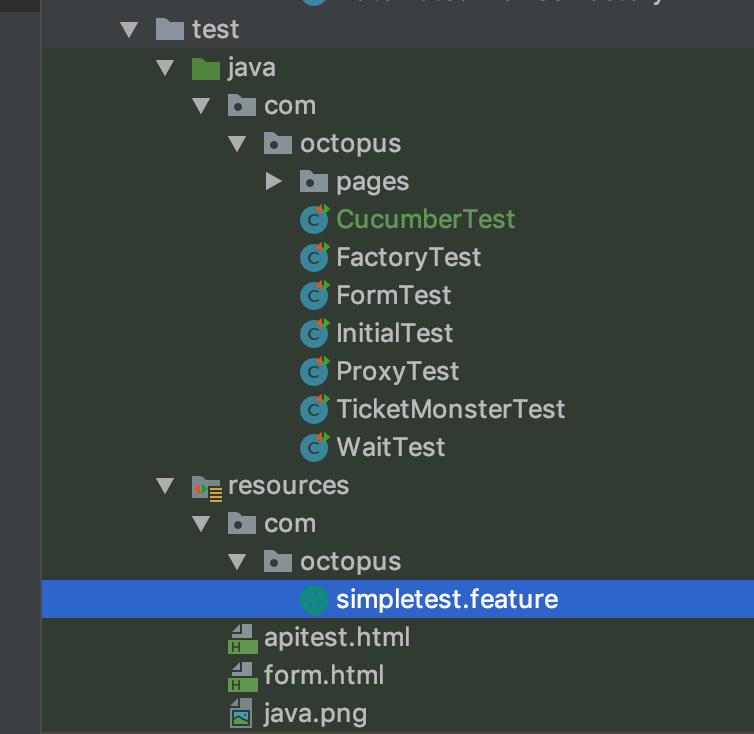 All Gherkin feature files start with a Feature: section. A feature is a group of related Scenarios:

Next we have the Scenario:. A scenario is like a method in a traditional unit test class, in that it is self-contained and demonstrates some aspect of the system being tested:

Finally, we have the two steps that we defined in the AutomatedBrowserBase class.

Notice that the step prefixes used here don’t exactly match the names of the annotations. While it would be nice if these step matched up with the annotation names, this is not a requirement.

To run the test click on the icon next to the test class and select Run 'CucumberTest'. 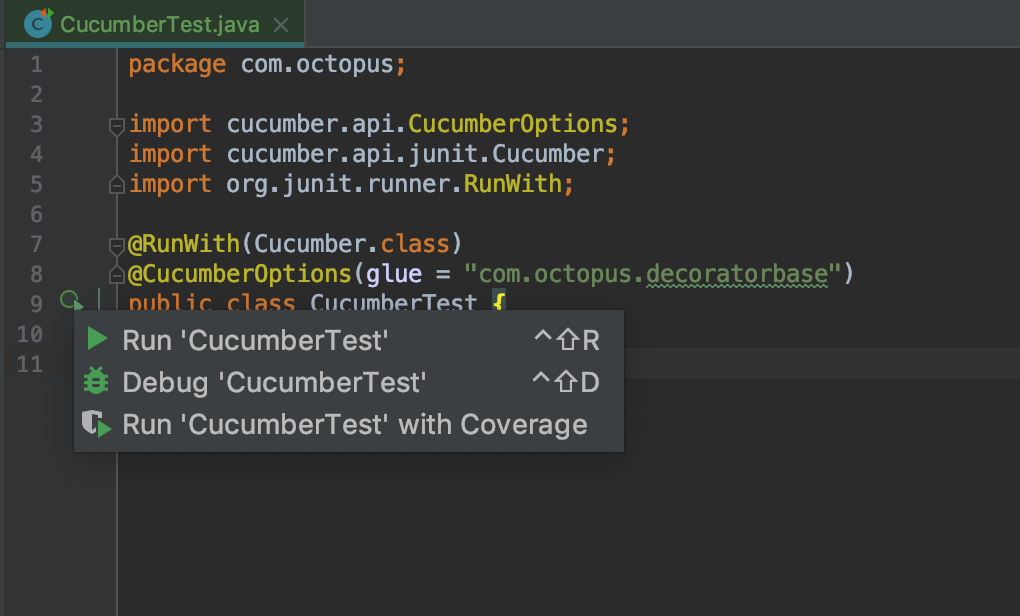 Running the test will find the simpletest.feature file and execute it. The feature file in turn will open Chrome and then close it straight away. In the test results, we can see that we successfully ran 1 Scenario, resulting in 2 steps being run.

We have now laid the foundation for creating a Gherkin dialect that will allow us to write natural language tests that can be verified using WebDriver. However, we still have a lot of work to do to create end to end tests. In the next post, we will expose more of the AutomatedBrowser class to Cucumber, and work towards creating a readable end to end test.