You may have seen the release of .NET Core and ASP.NET Core 1.0 was announced at DevNation recently.

We were honored to get a mention during Scott's presentation. And we're excited about the possibilities for .NET Core.

Disclaimer: IANALG (I Am Not A Linux Guy). But I think that's the point. Most .NET developers are (at least currently) most familiar with Windows. For many of us, Linux is a strange (and if we're honest, scary) new world. Come on, let's hold hands...

The problem with writing a technical procedure post is that it's often obsolete by the time you finish writing it (a problem very apparent when following posts regarding .NET Core).

Wherever possible I have referenced official documentation, which is far more likely to be maintained.

If you want to skip creating the package, you can download the zip file from the Releases page on the GitHub repository.

If you haven't already, clone the sample application repo:

Move to the directory you cloned the project into. The following commands will be run from there.

Note: We have a saying at Octopus HQ: "Friends don't let friends right-click-publish". In a .NET Core world we may have to update it to: "Friends don't let friends dotnet publish". Creating your package and pushing it to Octopus should be performed by your Build Server. Plugins are available for most popular Build Servers (e.g. Team City, Jenkins, TFS).

See here for our official documentation on publishing ASP.NET Core applications to Octopus.

Publish the application to a directory:

You should now see your published package: 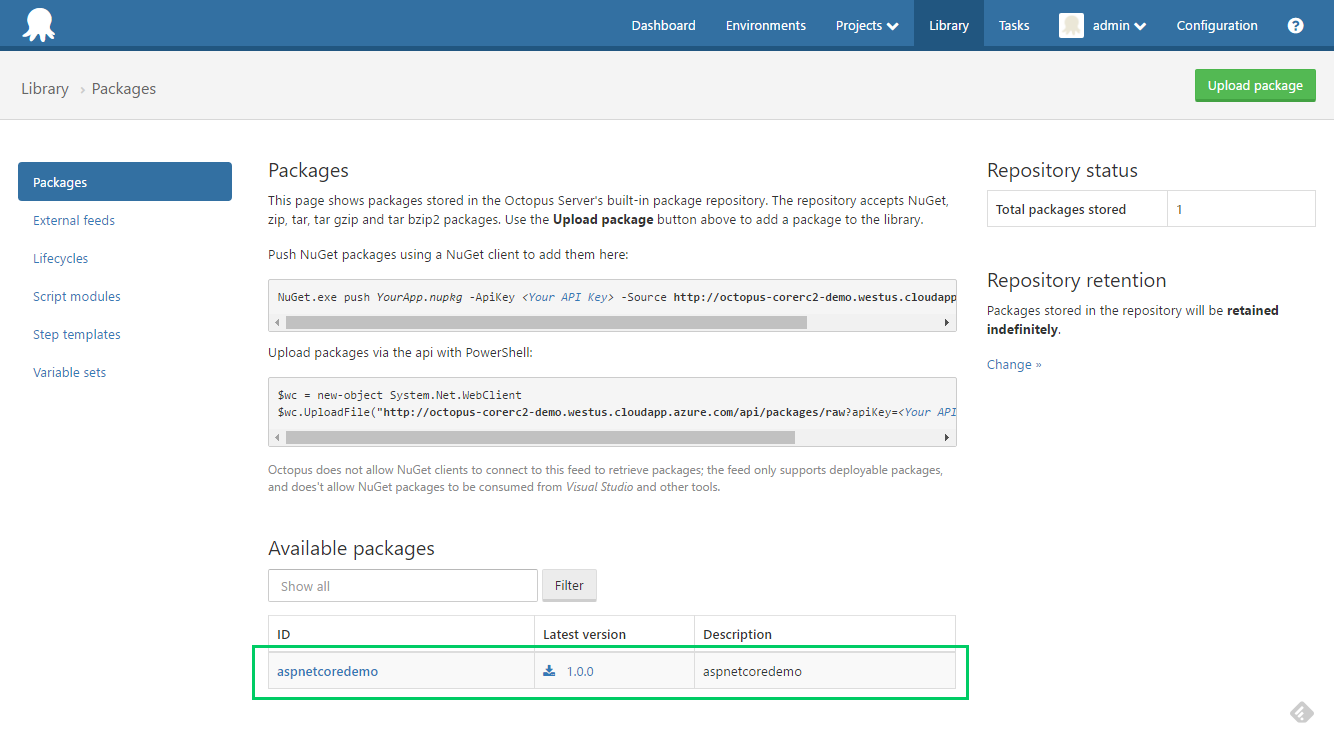 Create an SSH Target in Octopus

There are a couple of requirements the Red Hat Linux server must satisfy in order to be added as an SSH Target in Octopus:

Mono must be installed. The most up-to-date instructions can be found in the Mono docs. For a RHEL server, follow the 'CentOS and derivatives' section.

In a root shell, execute:

Octopus will authenticate with the RHEL server using an SSH Key Pair. A guide for creating a key-pair can be found here.

In your Linux shell, generate an SSH key-pair:

Add the public key to the authorized keys:

Obviously we need .NET Core. Instructions for installing .NET Core on RHEL can be found here. For full disclosure, this author followed the CentOS instructions rather than using subscription-manager.

For our little demonstration application, there is no reason we couldn't have Kestrel directly serving requests. But the consensus seems to be that best-practice is to use a production-grade web server as a reverse-proxy in front of your ASP.NET Core application. On Windows this would be IIS.

We'll use NGINX. Following the instructions found at https://www.nginx.com/resources/wiki/start/topics/tutorials/install/# I create a file /etc/yum.repos.d/nginx.repo, and edited it to contain:

I also modified /etc/nginx/nginx.conf to include the line:

and we should also create that directory:

This will be important when we deploy our application.

So the http section appears as:

An ASP.NET Core application is run by executing the dotnet utility. Executing it directly via the terminal is fine when you are testing locally, but for deploying to a server we need:

So we'll use Supervisor.

And we will create a Supervisor configuration file using default settings, as per here:

Now we will create a directory to hold our application-specific supervisor config:

And edit /etc/supervisor/supervisord.conf and add at the end:

Note: Installing Supervisor using easy-install does not appear to register Supervisor with SYSTEMD. This seems like something you would certainly want to do. A nice walk-through of the complete supervisor setup can be found here.

By default your RHEL server will likely be rather locked down (as it should be). Since we are going to be using it as a web server, we need to loosen the chains.

I can't state strongly enough that I am not qualified to provide Linux security advice. Please consult your local sysadmin. And apologize in advance.

By default, SELinux was preventing NGINX from proxying HTTP requests to Kestrel. Information regarding this can be found here.

Running the following should allow connections to be made: 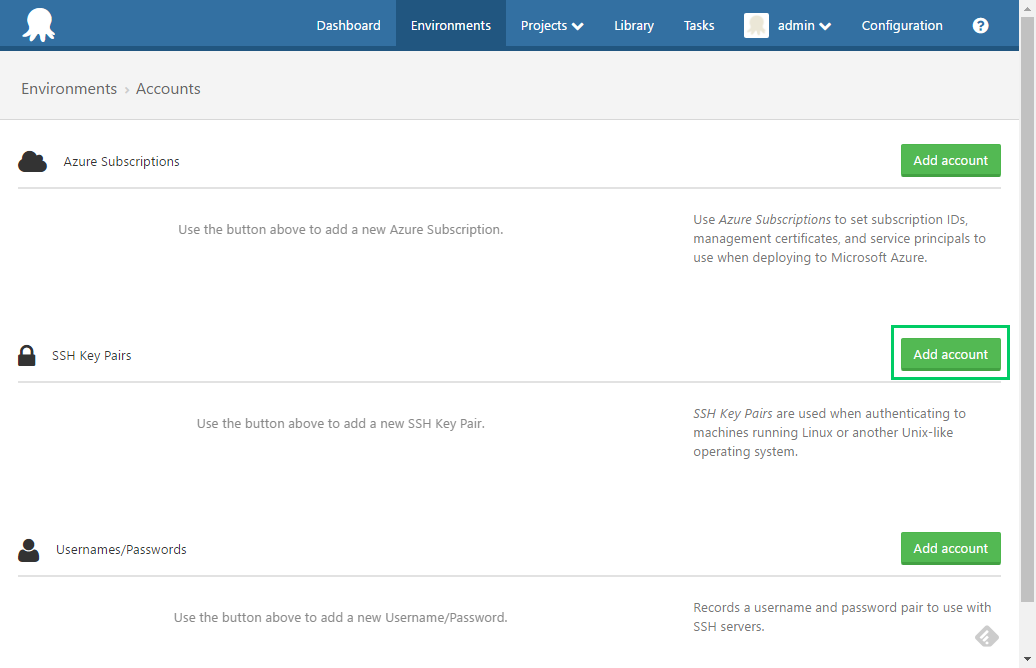 The private key can be obtained by:

You will need to save the text into a file, which will then be supplied for the 'Private key' field as shown below. 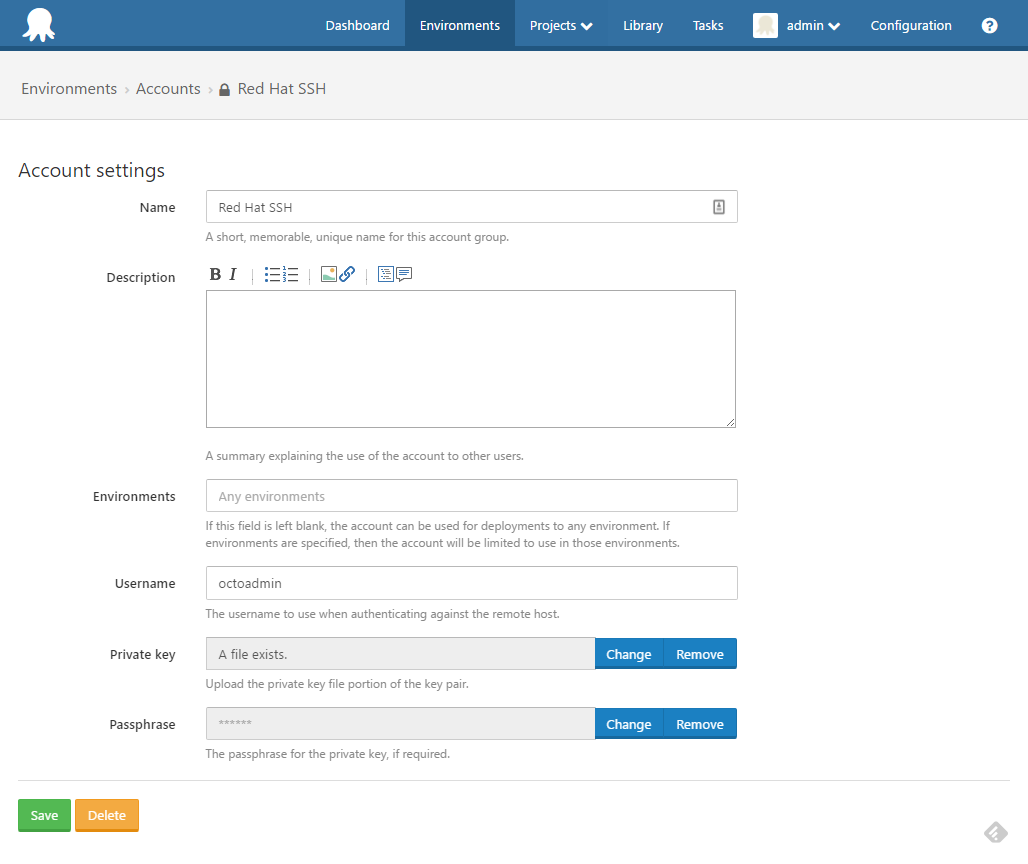 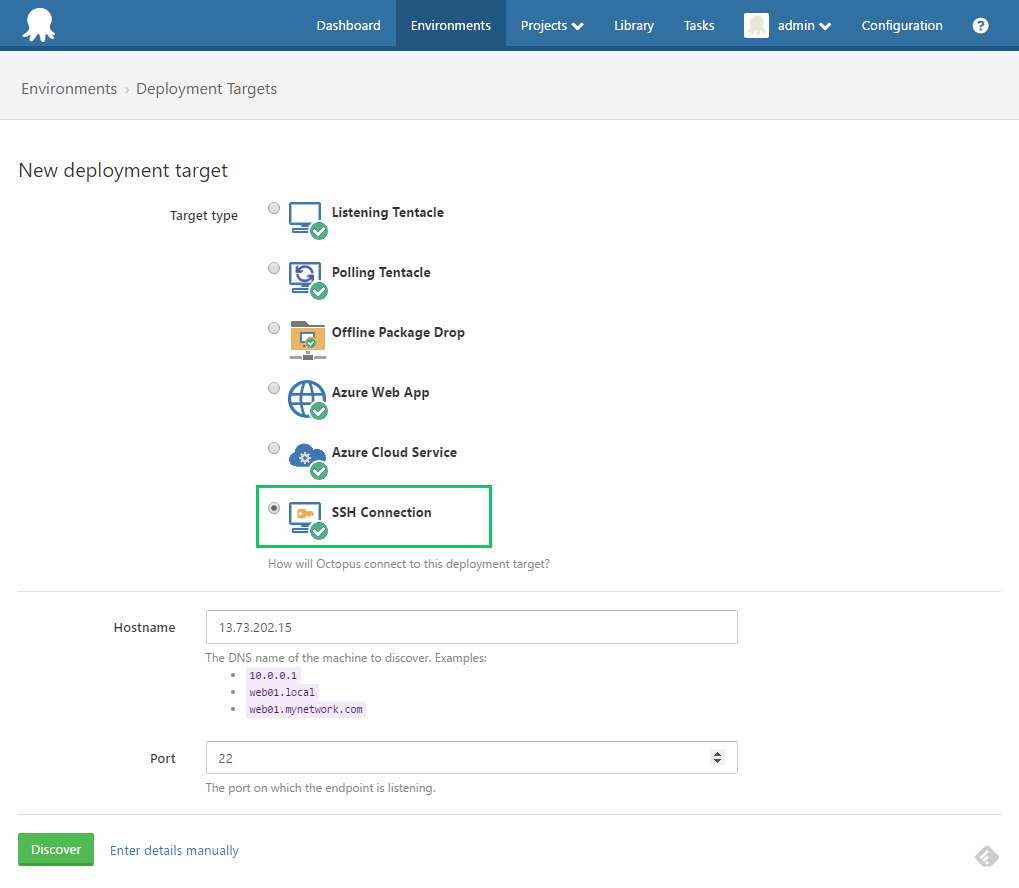 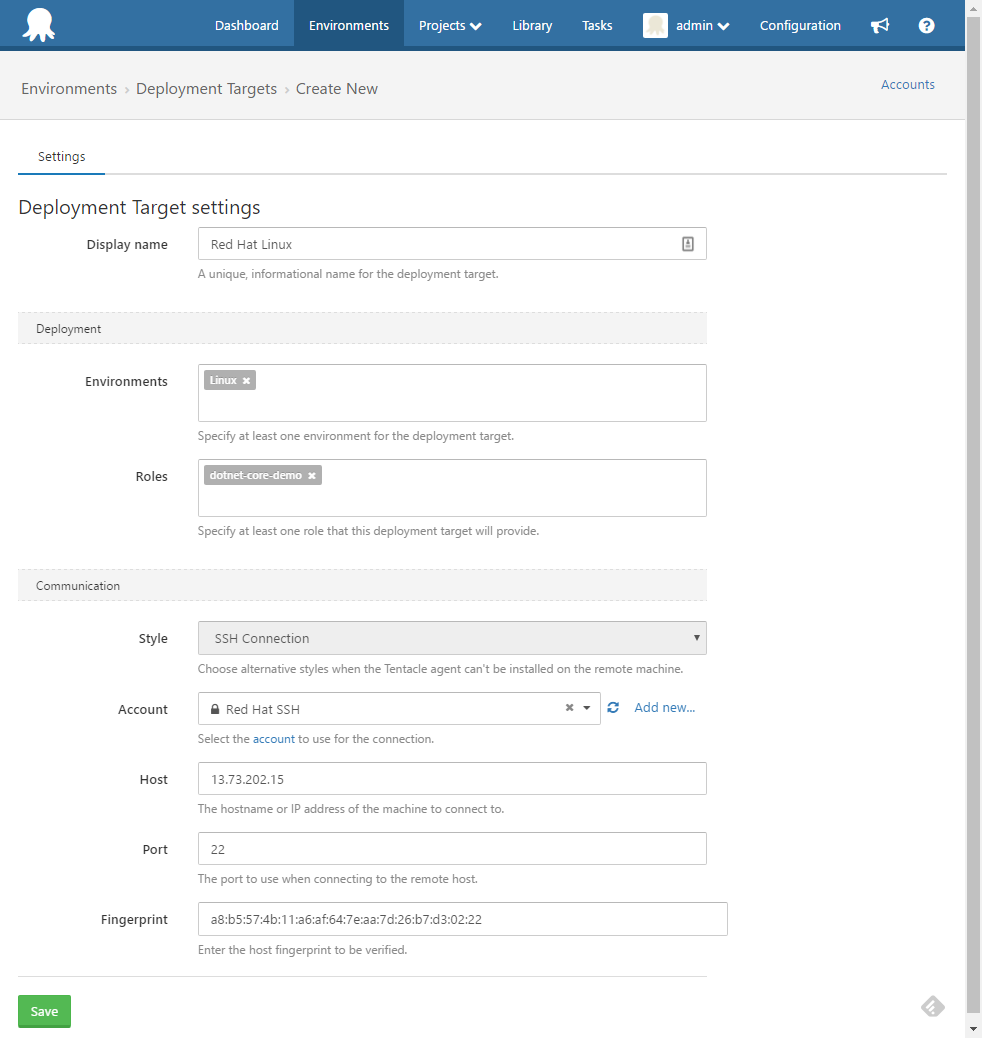 Once you have created the target you can run a health-check to ensure connectivity.

Create a Project in Octopus

Now we will create a project to deploy our ASP.NET Core Demo application. 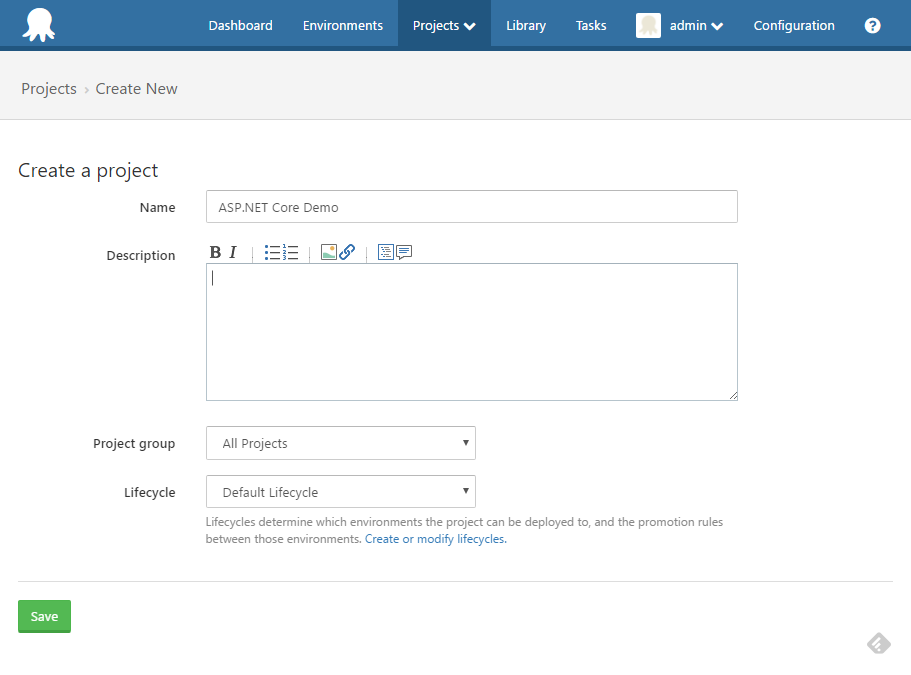 Add a Deploy a Package step to your Project. 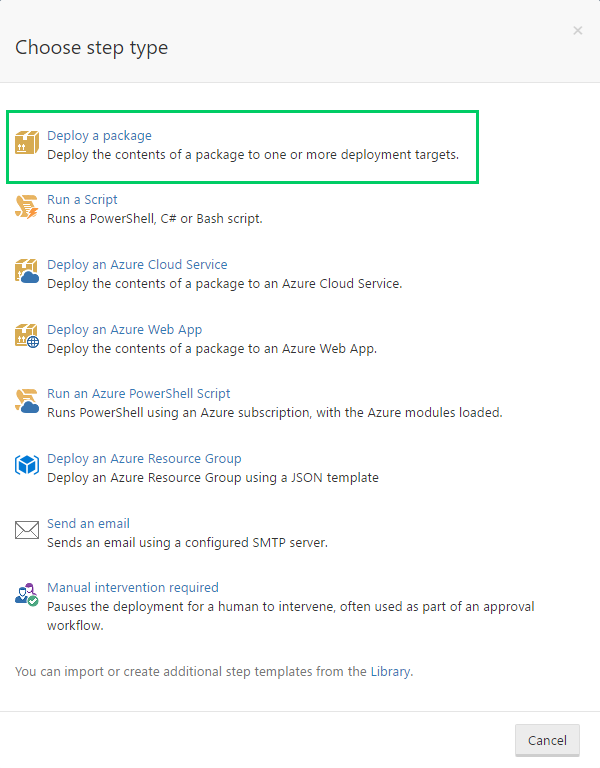 It will reference the package we previously uploaded.

We will enable two features for this step: 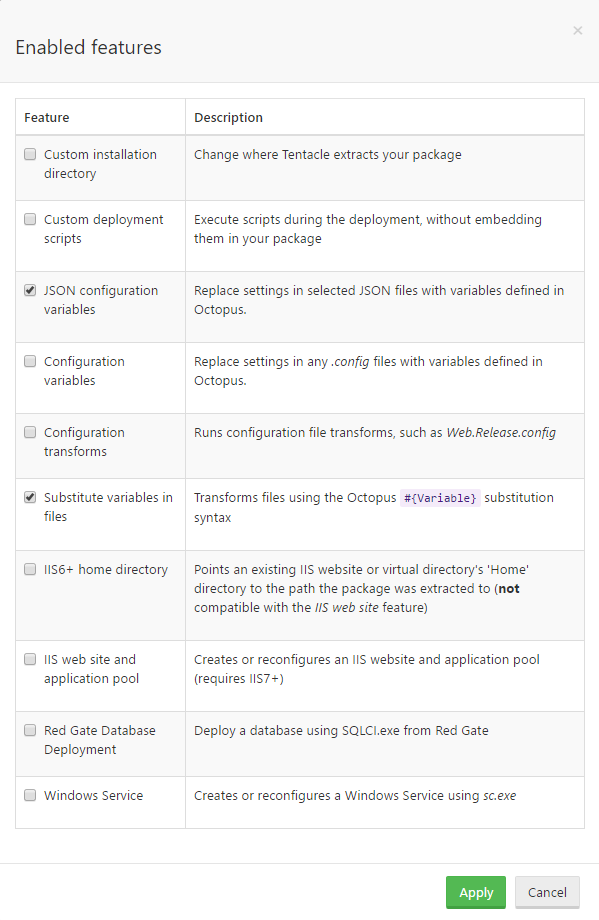 We will use the JSON Configuration Variables feature to transform our appsettings.json file.

In this case we are simply changing the rendered message, but this demonstrates how Octopus can transform hierarchical variables in your JSON configuration files.

We will also use the Substitute Variables in Files feature to supply variables to our NGINX and Supervisor configuration files.

If you view these files (located in src\aspnetcoredemo\deployment), you will see they contain placeholders for Octopus variables. For example, the nginx.conf file contains the #{IPAddress} variable:

Next we will add a Run a Script Step to move our NGINX configuration file to /etc/nginx/sites-enabled and tell NGINX to reload. 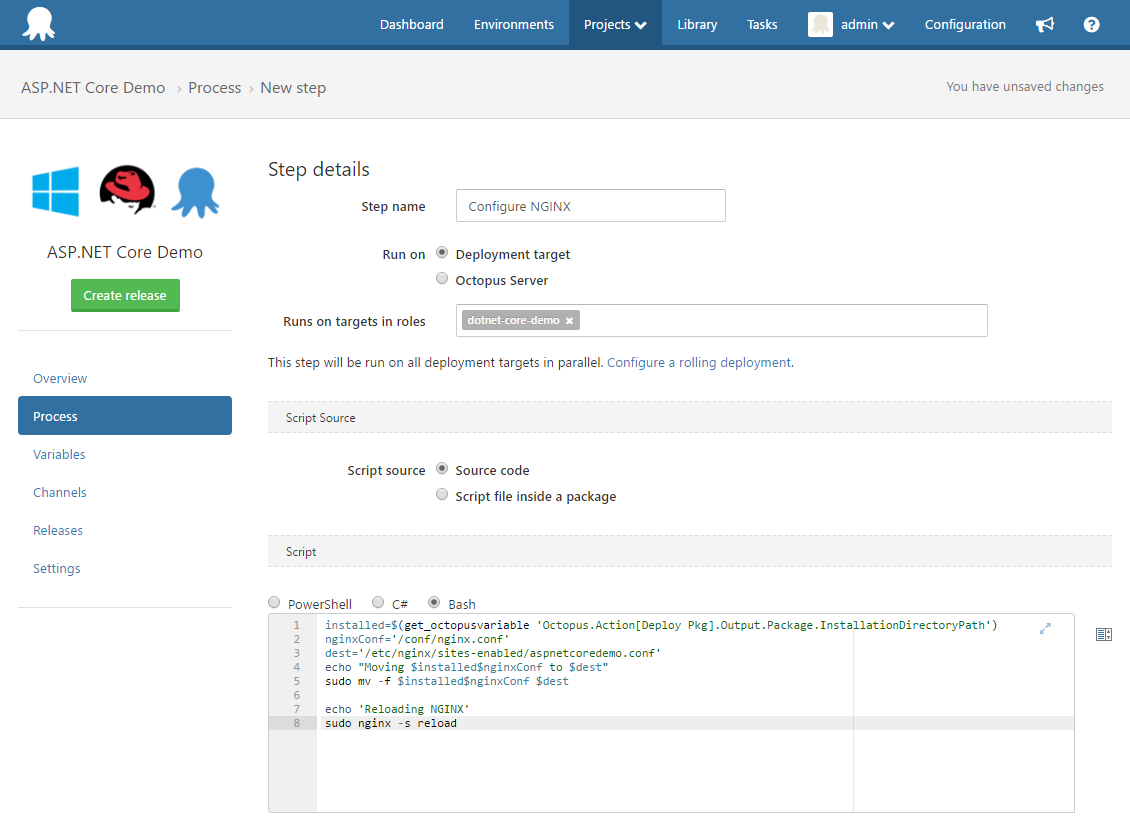 The script source is:

The first line gets the path to the extracted package.

Being able to drop files into the sites-enabled directory saves us from having to modify the existing nginx.conf.

Now we will add another Run a Script Step to move our Supervisor configuration file to /etc/supervisor/conf.d/aspnetcoredemo.conf and tell Supervisor to reload. 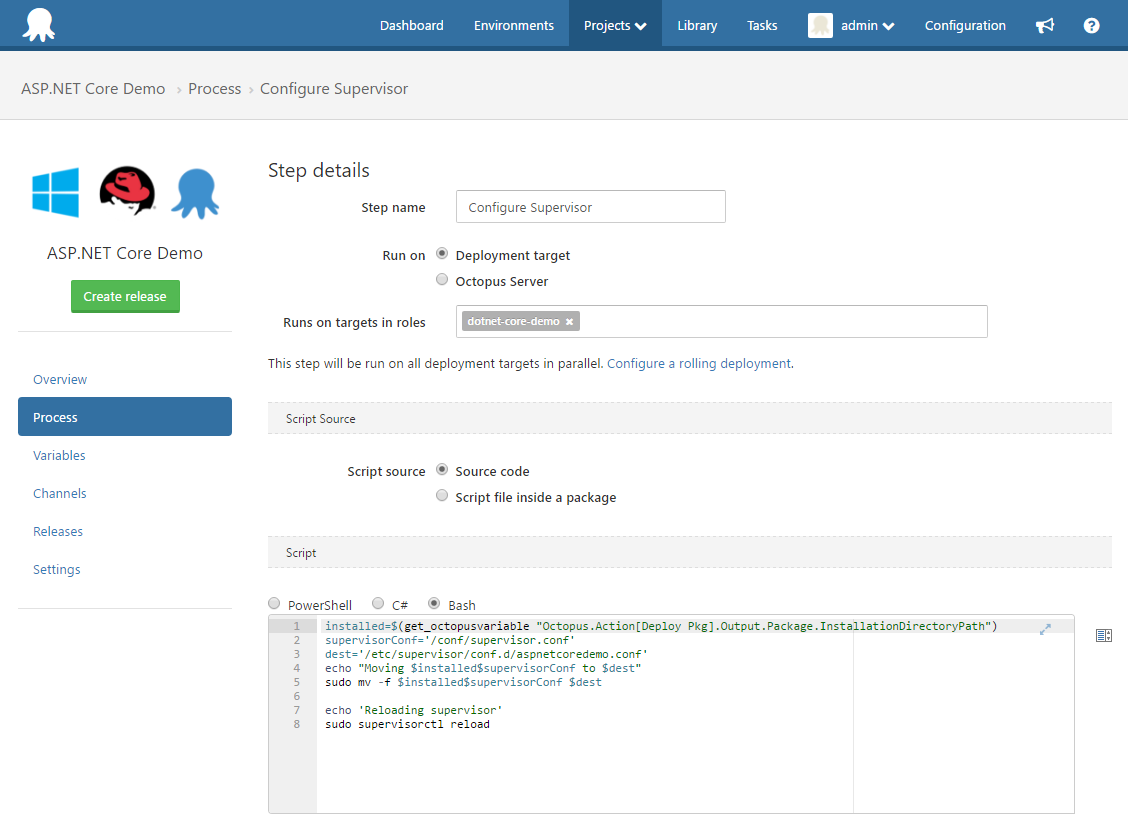 The script source is:

And finally we need to add the variables which will be substituted into our configuration files. 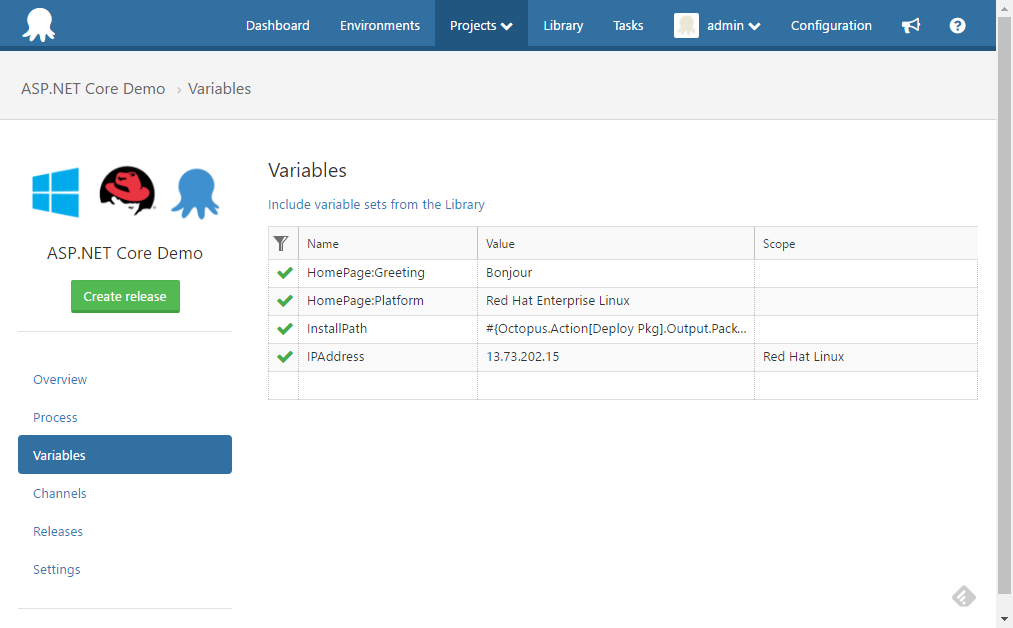 At this point your deployment process should appear similar to: 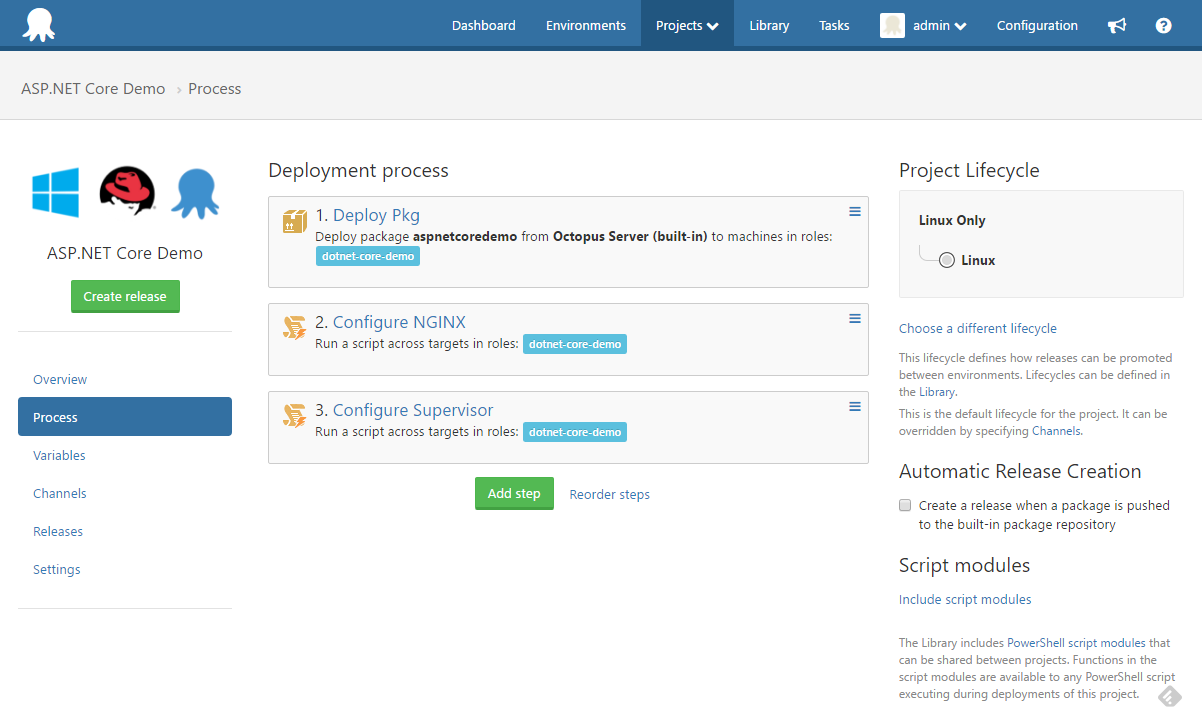 What are you waiting for? Create a Release, and Deploy! 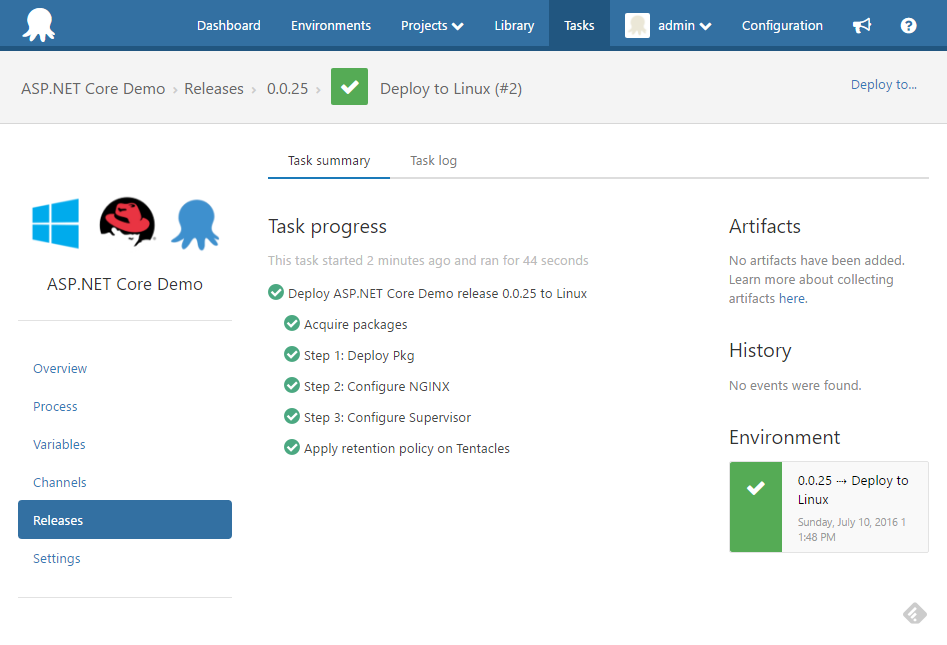 If all has gone well, you have just deployed an ASP.NET Core application to a Red Hat Enterprise Linux server.

Note to self: Add balloons.png to sample app home-page ;)

Although it's beyond the scope of this post, it's worth mentioning that with very little effort, we can take that same package and deploy it to also both a Windows 2012 R2 Server and an Azure Web App. 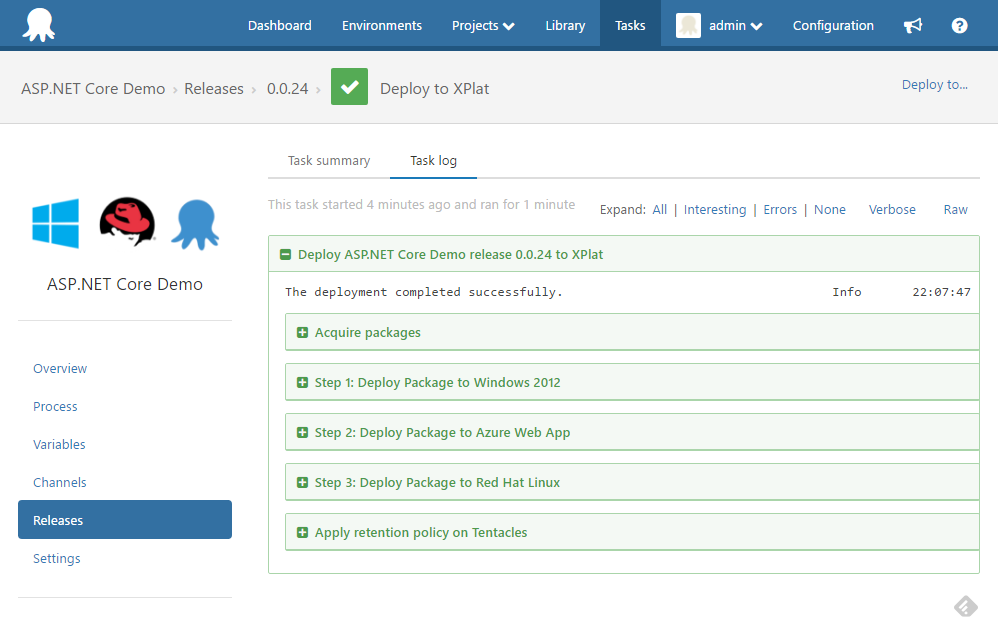 .NET Core provides a great opportunity for us to improve our story for deploying to Linux targets.

The fact that you currently have to install the Mono framework on your Linux server in order for it to be an Octopus Deployment Target is awkward in many cases. We are moving towards making our deployment tasks execute using .NET Core, removing the Mono dependency completely.

If you are using Octopus (or even thinking of using it) to deploy .NET Core applications to Linux, we would love to hear from you.

Please tell us what works, what doesn't, and how we can make your deployments easier and more reliable.