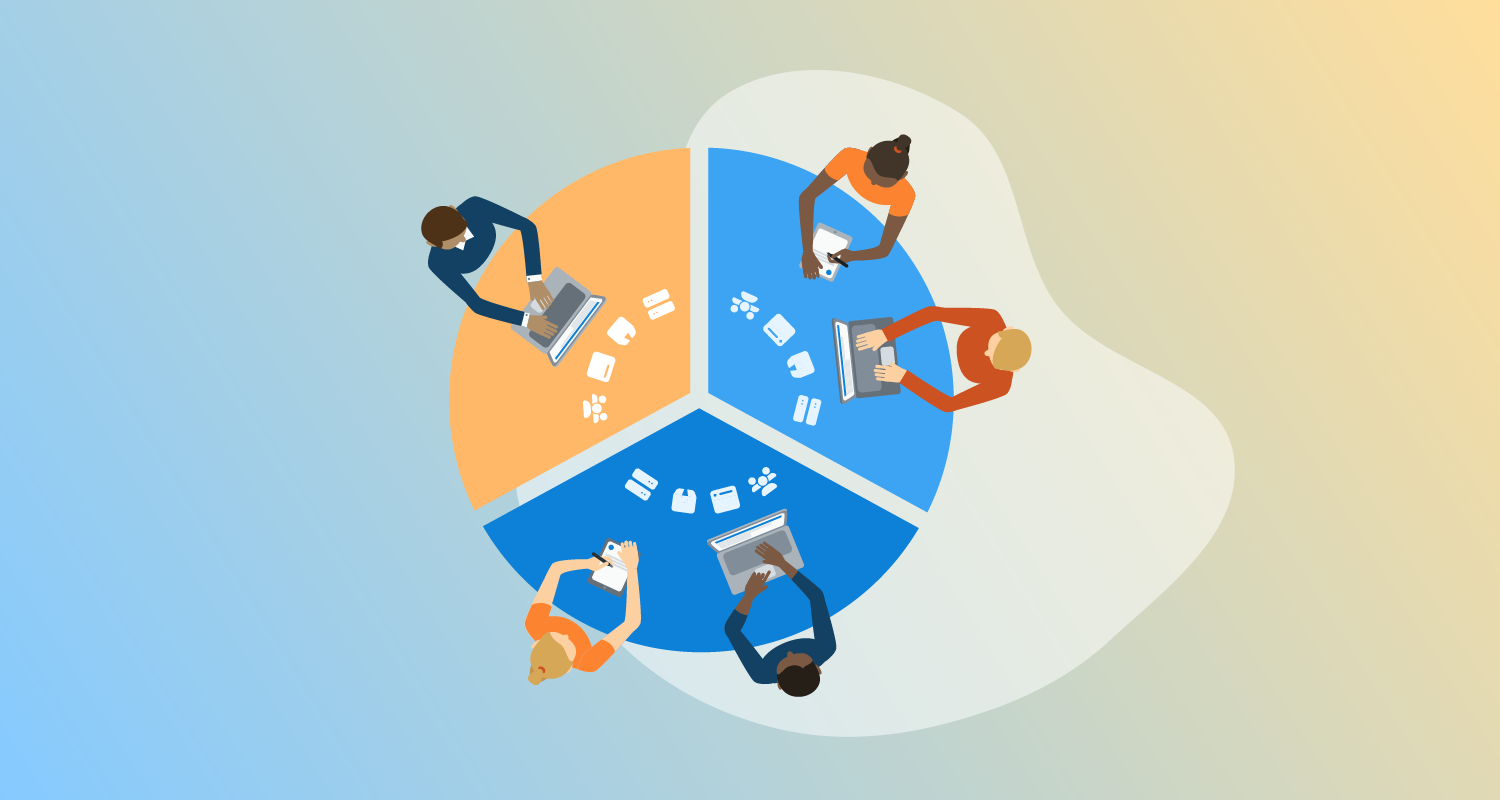 Over the years at Octopus, we've always been pleased to see our customers expand their use of Octopus Deploy to include new projects and teams. In the early days, it was hard to imagine this could ever pose any kind of problem. However, there comes a point when having too many projects in Octopus can become a distraction, particularly for a team that only works on a handful of those projects.

The Octopus Spaces feature helps you organize and secure your projects, environments, and infrastructure and control which team members can access them. They're a useful alternative to installing multiple Octopus Deploy instances.

In this post, you learn how to use spaces effectively to organize your deployments.

An overview of spaces

Spaces are partitions that create hard walls in your Octopus Server. Deployment resources assigned to a space can't be seen or used from another space. You can use spaces instead of creating multiple instances of Octopus Deploy, with each space being self-contained.

The following items are scoped to a space:

These space-scoped items cannot be accessed from other spaces.

Teams are a special case. When you create a team, you can choose whether to scope them to a single space or have the team span all spaces.

All events are written to the system-level audit log, which you can filter per space.

An Octopus Administrator can give full responsibility for managing each space to a Space Manager, which can reduce the workload for the administrator.

The administration guide for Spaces has instructions for managing spaces.

The benefits of spaces

There are two primary use cases for spaces:

You might choose to use spaces for either or both of these reasons.

Your Octopus Deploy Dashboard displays a row for each project and a column for each phase in your lifecycles. The dashboard gets taller when you add more projects and wider as you create more phases. If you find your dashboard overwhelming, moving projects into spaces will clean it up and reduce how much you have to scroll.

You'll get the same benefits across all screens in the space and when choosing resources from a list, such as editing a process step, as only items from the current space are shown.

Spaces allow you to limit the growth in each area by grouping related resources together.

Before we introduced spaces, you had some control over the visibility of projects using teams with scoped roles. However, this could become difficult to manage. It was hard to stop items like deployment targets from being re-used by new projects.

Spaces give you a convenient way to control access to a group of related resources without complicated permissions. You can grant a team member full or read-only access to the spaces they need, and they can then switch between them quickly using the space switcher. 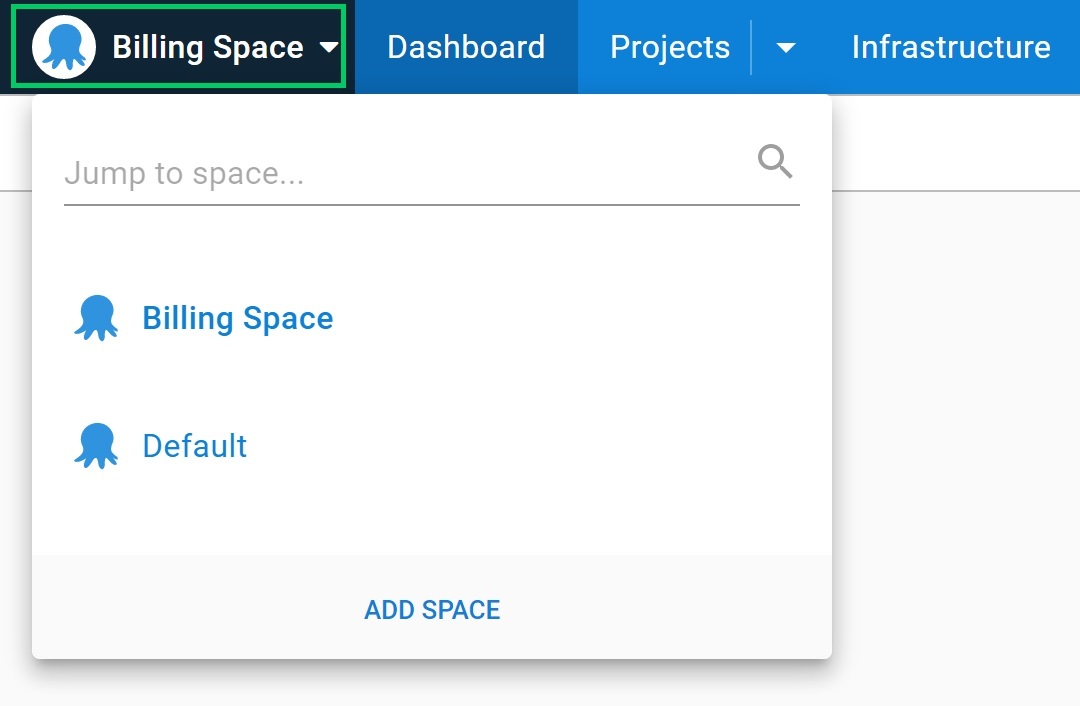 How to design your spaces

A space represents a logical group of applications. If you have several closely related components, they're likely to share some variables in a variable set or be deployed to the same infrastructure. These factors will naturally guide whether they should be grouped into a space or kept in separate spaces to prevent them from becoming related in undesirable ways.

It may seem like a good idea to create a space for each team in your organization, but this isn't always the best design to follow. In particular, this may lead you to split items into too many spaces in situations where multiple teams contribute to the same application.

Instead, use one of the following dimensions to design your spaces:

Read on for more information about each of these options.

You can use the export/import project feature to move projects to a new space.

If you're an agency managing applications for multiple clients, using one space per client ensures no data will be shared between customers. All deployment targets, projects, variables, and lifecycles will be exclusive to the customer space.

You may decide to sub-divide a client into multiple spaces using one of the other options.

This option works when you have different applications for each client. If you're deploying the same application to client-specific infrastructure, tenants provide a better way to manage this.

An application group is a set of related components likely to be deployed to the same location.

Application groups are ideal for organizing spaces because similar design considerations apply to spaces that will have influenced your application design. For example, you might group the components of a content management system (CMS) in one space and the components of a billing system into a second space.

You may find that this design for spaces matches how you have organized your teams. It's fine to land on this solution if you've considered your application groups.

If you have more than one team contributing to an application group, you should maintain a space that aligns with the software, not the teams. You can give each team access to the space, and both can see a whole-system view of deployments so that it's clear if one application deployment is, for instance, blocking another.

A less granular approach is to have separate spaces that match intended audiences, for example, internal and public-facing applications. This approach cleans up the public-facing space by moving internal resources into a different space.

This design can quickly improve the information for your public-facing space and may serve as a first step toward splitting resources into spaces for each application suite.

If your company is organized into divisions that develop independent applications, this likely provides a natural design for spaces. For example, if the company has divisions that offer software to different industries, each division could have a separate space with a dedicated space manager.

With their own space manager, each division would be self-sufficient in managing its space without cluttering Octopus Deploy for other divisions.

The ideal scenario is that applications in a space are independent, deployed to dedicated targets, and have an autonomous team responsible for them. While you might not find yourself in this perfect situation, it provides a helpful guide when deciding how to design your spaces.

If there are strong reasons to split the deployments into multiple spaces, those same reasons likely mean you should have different deployment targets, too.

You should avoid using spaces for each environment, as you'll need to duplicate the process in each space. It would be difficult to keep the process consistent in each space when you make changes and you won't benefit from release snapshots. Release snapshots make sure the same versions of the package, variables, and process are used throughout environments, and this improves the reliability of your deployments.

You should also avoid using spaces where it's more appropriate to use tenants.

Where an application contains several components, it's better to keep them in a single space; otherwise, it becomes difficult to track the currently deployed state of the application as a whole.

Spaces are a valuable tool for organizing and securing the deployment-related resources you manage with Octopus Deploy. They provide smaller views over deployments and resources, but you should give due consideration to their design.