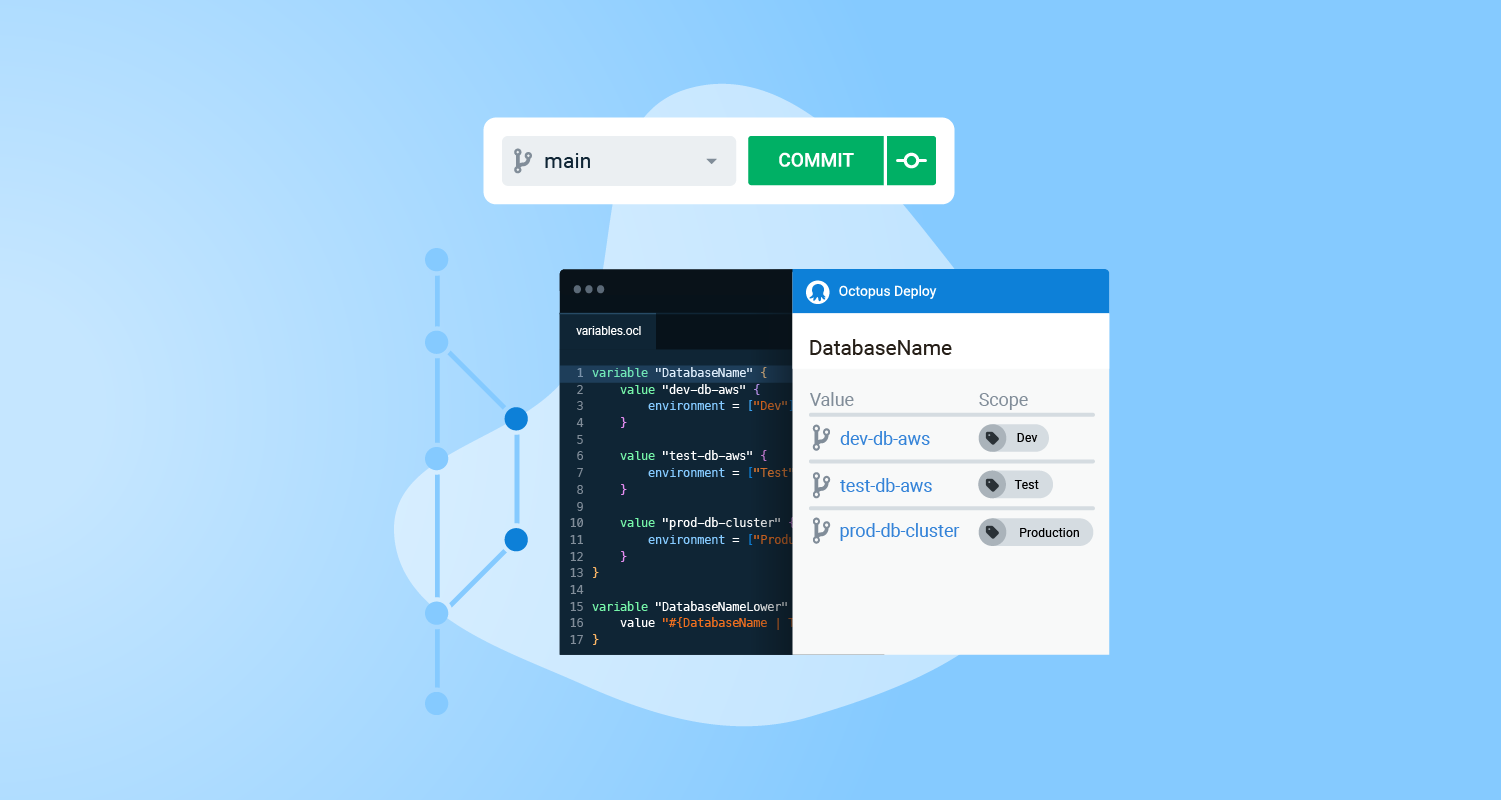 We launched Configuration as Code (Config as Code) in March 2022, and have continued adding new features based on customer feedback. One of the most requested features was variables for Config as Code.

As of Octopus 2022.3, you can store your non-sensitive variables in Git alongside your deployment process and deployment settings.

In this post, I cover the changes we made and dive into the design of the variables Octopus Configuration Language (OCL) schema.

Why variables is the first major upgrade to Config as Code

Since the release of Config as Code in March 2022, we've been listening to everyone's feedback to continue improving our support.

While there have been many feature requests, there was a clear theme: Config as Code feels incomplete without variables in the Git repository.

Variables was first, but we'll continue listening to your feedback and evolving Config as Code to meet your needs.

The first release of Config as Code had good support for version-controlled deployment processes and settings, but process changes that needed complementary variable changes required careful coordination. If you changed the wrong value, or deleted the wrong variable, it could disrupt other deployments.

With project variables now in the Git repository, the Config as Code feature and branching are even more powerful. You can make major changes to your deployment process and variables together on a feature branch without impacting anyone else until you're ready to merge your changes.

This makes action scoping much more useful in Git projects. You can add a new step on your feature branch, scope a variable to this step, and merge these back to your default branch as a single block of configuration when you're ready.

For now, sensitive variables will remain in the Octopus database. On the project variables page, we make this clear by showing a database icon next to all sensitive values. 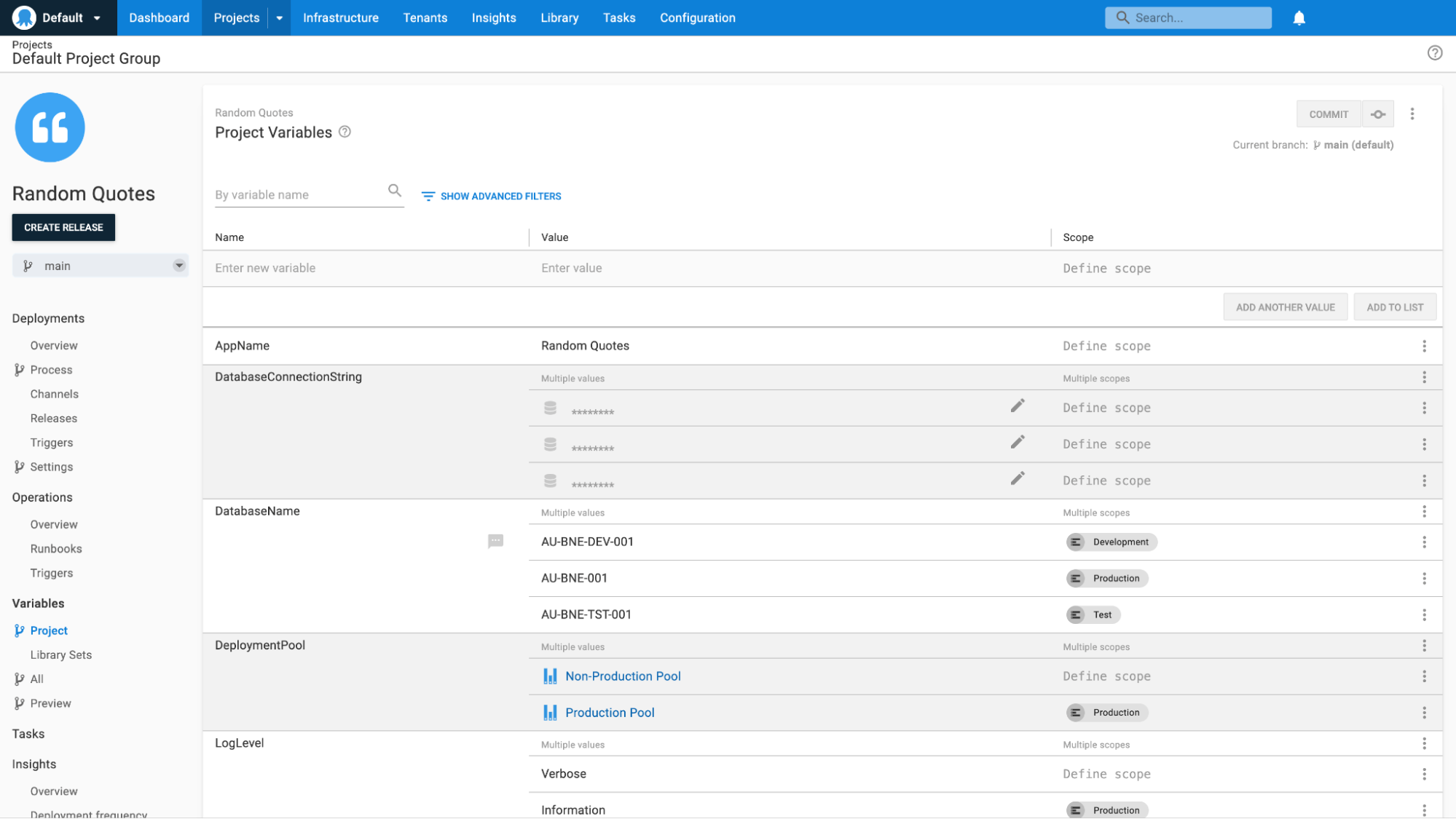 Regardless of the selected branch, commit, or tag you'll always be viewing and modifying the single shared set of sensitive variables. We're investigating the best way to securely store sensitive variables in Git. We hope to add support for this at some point in the future, but for now sensitive values remain in the database.

After you upgrade to a supported version, the project variables will automatically be migrated alongside your deployment process and deployment settings when converting the project to Git. You don't need to complete any additional steps.

For existing Git projects, you need to migrate your variables to Git manually.

We initially planned to automatically migrate the variables on the next commit for everyone who upgraded. After some testing of this approach, however, it was clear this wouldn't work for many teams. The potential for disruption was too great, especially for cloud customers who receive frequent updates to their instances.

Instead, we opted to have a transition phase, so everyone can perform the migration at a time that suits them. If you have an existing Git project with variables that haven't been migrated, you'll see a banner on the project page.

Clicking the MIGRATE VARIABLES TO GIT button shows a wizard that guides you through the migration.

This transition phase has resulted in 3 possible project states:

This adds additional complexity to the codebase, and requires time and effort that could be used for new features. With this in mind, we're not going to support this transition state forever. We'll eventually remove support for Git projects with variables in the database, so we recommend migrating your variables as soon as practical.

The original variable route (/api/{spaceId}/variables/variableset-{projectId}) will continue to work for projects with variables in Git, but it will only return the sensitive values. We recommend always using the new project scoped routes.

These don't apply if you only use Octopus through the UI. The project variables page will write the values to the correct locations for you.

An ongoing goal for Config as Code is to keep the Octopus UI fully functional for Git projects. We want to provide a great experience for those who edit OCL directly in a text file.

In the first version of Config as Code, we took our existing deployment process and deployment settings resource models and translated them directly to OCL to create the schema. This worked well for these resources, but we had to take a different approach with variables.

Variables are passed through the API and persisted as a single-level array of variables. Multi-value variables are persisted as completely separate variables with the same name. Had we just written this directly into the Git repository, the OCL would have looked something like this.

We took a completely different approach to OCL serialization to achieve this, but we're happy with the result. It makes OCL easier to reason with and provides a great editing experience. This gives us options for how we define OCL schemas in the future, and will feed into enhancements we plan to make to the persistence and API layers.

The latest version of Config as Code with Git variables is rolling out to Cloud and available on on-premises when you download the 2022.3 release. After your instance is up-to-date, you can migrate your variables to Git as soon as you're ready.

We'd love to hear your feedback and learn what features you want next via our Config as Code feedback form.