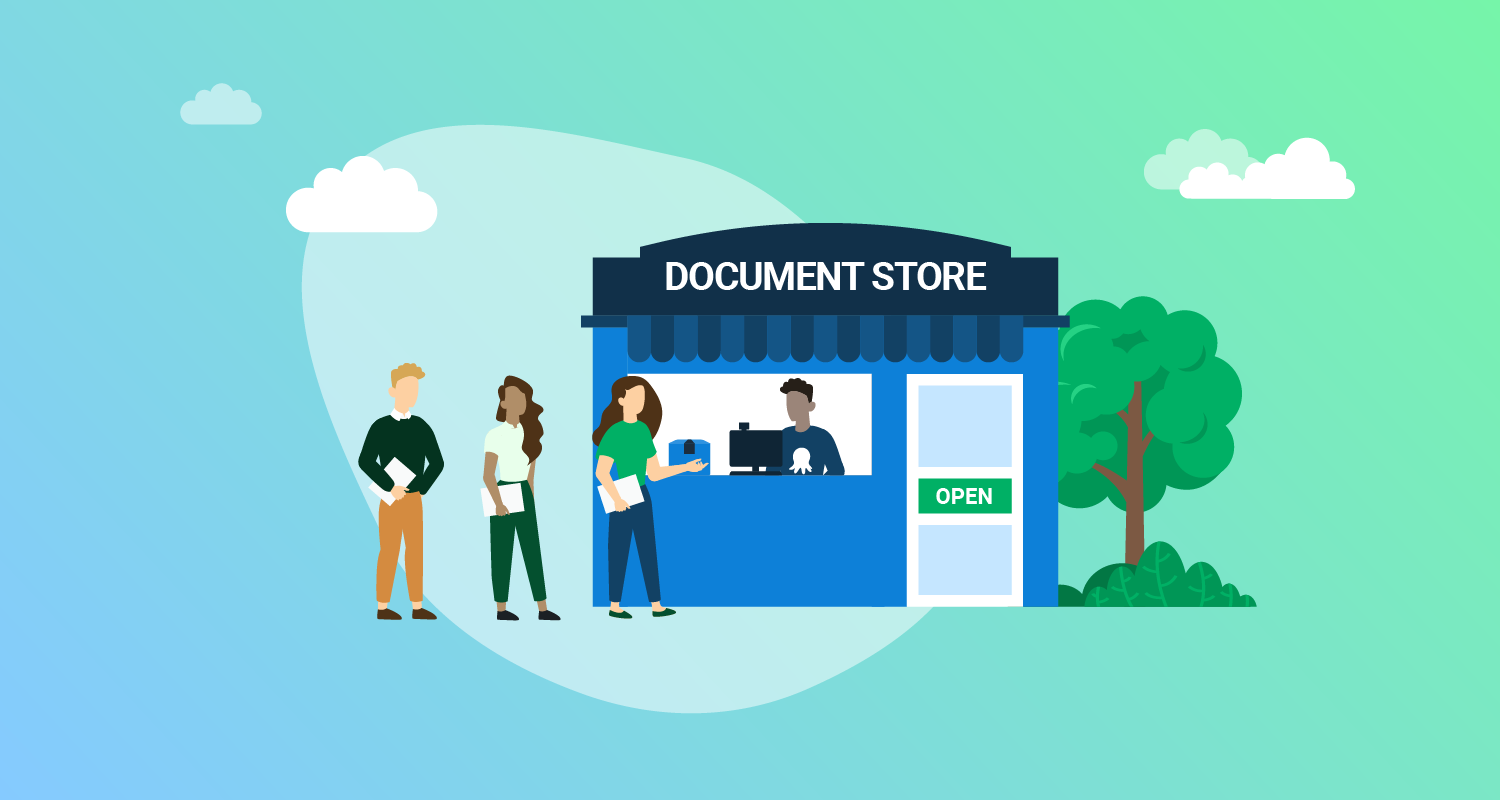 When introducing the Configuration as Code (Config as Code) feature to our codebase, we ran into some persistence ignorance opportunities - to have our code ignorant of any persistence/storage logic.

This post explores how our Core Platform team made decisions about persistence ignorance. We hope others can learn from our experience.

In 2014, in the days of Octopus 3.0, we decided to switch to SQL as our storage/persistence layer. This meant when you saved data in Octopus, it stored/persisted into SQL database tables, as you'd expect.

In the Octopus codebase, we chose to keep things simple. We talked to those tables directly with Nevermore transactions. Nevermore is a micro-ORM that treats SQL Server as a document store.

In this example, our class:

When we began shaping Config as Code, we suddenly had multiple persistence layers to consider.

For version-controlled projects, the data for your deployment process is now stored as an Octopus Configuration Language (OCL) file in your Git repository, not in SQL.

From an API consumer's perspective, not much has changed. You request a deployment process and tell us which branch you want to view. We read from that Git branch, deserialize the OCL to our data-model, and send the results back to you as JSON.

For example, imagine a regular project's deployment process could be requested as follows:

A version-controlled project would include branch information. In this case, we see a beta branch being requested:

As an API consumer, you don't know (or care) where that data comes from. You just want a deployment process. The API you rely on to get that answer should be simple and intuitive.

As an API developer, your journey to support that user experience should also be simple and intuitive.

I just want an X. I don't care how it's stored or where it comes from.

If our developers had to manage too much switching-logic in their minds when thinking about the data-model, there'd be a risk that the confusion extended to the customer in the form of bugs, inconsistent behavior, or slow churn time for features/fixes.

Consider this method again, with version-control:

If you're prototyping to prove what's possible with Git, that's not an unreasonable place to start (and this was where we started when exploring possibilities).

But thinking long term, with more features potentially moving to Git, and more engineers needing to query/mutate data, there was an architectural and scalability opportunity.

To address this, we introduced a document store abstraction layer (see repository pattern).

Our vision was that developers could take a dependency on an IDocumentStore<T> and that generic interface would allow them to query the data-model in similar ways to our existing (Nevermore) interfaces.

When a developer asks for an IDocumentStore<T>, our base document store uses a strategy pattern to determine whether you're dealing with a version-controlled project or a regular (SQL) project. Its job is to give you the right type of document store. As a developer, you don't have to think about it.

Our code sample from earlier becomes simpler to reason about:

Transactionality was an interesting challenge and observation.

When we talked to a SQL database, we opened a transaction, performed actions on that transaction, then closed and disposed of it.

You may be asking what happened to the transactions in the code above?

From 2014, we chose short-lived transactions throughout the codebase (both our API and the task system).

In many ways, this was ideal. We could guarantee short-lived transactions and reason about transactional code in isolation. For example, anywhere you saw code like this, you could easily reason about the transaction lifetime:

In other ways, we saw 2 downsides longer-term.

There was a possibility that several transactions would complete successfully and commit, but one at the end would fail. In this case, an exception would be correctly returned to the user, but the earlier transactions from the same failed request would not rollback, leaving you with data inconsistencies (several of these issues were found and fixed as part of this work).

To avoid this, we found many cases where we'd create a transaction early in the call-chain, then pass that transaction around as method parameters (sometimes through massive call-chains 10+ methods deep, including many static call-chains). In these cases, some middle-method might call .Commit() and you had to hope nothing else would also call .Commit() on that same transaction (as you can only call commit once).

Secondly, when we started talking about a document store abstraction, we started asking:

Developers have to think about the thing they're asking for (the deployment process), and also how to hold transactions around that thing.

When we talk about single responsibility in this case, transactions are additional and unnecessary context. It's unrelated to what we're asking for, the deployment process.

To be clear, it's very powerful to have the option of transactional control like we'd been doing. But for the majority of cases, we shouldn't have to think about it.

Also, transactions are an advanced topic. Developers in our growing team could easily hold transactions in questionable ways or forget to commit entirely. Things like this would likely be caught during testing, but this illustrates the unnecessary churn that starts to creep in.

Our job architecturally is to help our developers fall into the pit of success. When we observe complexities like this creeping in (especially as we start to scale), it's a great opportunity to consider a new abstraction and try to improve on the amazing foundations that got us here.

To help us manage transactions across requests/commands, we introduced a Unit of Work so there'd be one less thing for developers to consider. Consumers just ask for a document store of a given type. The Unit of Work surrounding their operation would be managed for them and not their concern.

It's safe to say, consumers just want an X, so let them ask for just the thing they need.

With transactionality abstracted into a Unit of Work, that lead to the question of branching.

Remember the strategy pattern we mentioned earlier on our document store (the one that helps us determine what type of document store you should receive when you ask for an IDocumentStore<T>)?

We knew there'd be details (such as the project and/or Git branch) that would be useful to consumers much lower in the hierarchy. We wanted to encapsulate that information into a "project scope".

We wanted to discourage passing that information around everywhere as method parameters. The risk was having the equivalent of props-explosion on our back-end (10+ levels of passing a thing around just so a consumer at the very bottom can use it).

Imagine having to pass the Git branch name and/or commit information as optional parameters to all the IDocumentStore methods that we might need for version-controlled documents. Our document store abstraction would suddenly be... not very abstract.

Leaning on our Dependency Inversion (DI) principle, we can take a dependency on an IProjectScope and tell it to encapsulate that branch or project information once per request at the highest level in our call-chain as possible (such as ASP.NET middleware or action filters).

Then our lowest level code in the same call-chain can also take IProjectScope as a dependency and query that information safely, without us having to pass everything around as method parameters.

When we used DI in this way, we quickly found all the road blocks, such as public static methods that can't take advantage of constructor dependencies. We rewrote these in a non-static way, stripped out the (now) unnecessary transaction method parameters and embraced more single-responsibility.

In the end, we found there was less to keep in our heads at once; less to reason about; less reasons to change.

In many previous cases, we had to take a dependency on a caching abstraction and work with it directly, to provide performance improvements for various customers.

This did the job well over the years. But our code was getting increasingly more complex to reason about as we grew.

Consider this example, where the consumer is looking for Foo documents for a given project:

It's only a couple of lines, and it's providing serious value. It provides a cached version of a Foo and saves us from hitting the database unnecessarily.

But there's context the consumer has to stop and think about here.

The consumer has to:

Developers often failed to consider our cache when writing code. Because of this, we were being reactive to some performance problems and spot-fixing things to use cache as they arose.

But again, why should the consumer have to think about caching at all? It's not their responsibility.

However it is someone's responsibility. We still wanted the value it was providing. It just needed to move somewhere else.

With an IDocumentStore<T> abstraction in place, we could write decorators and introduce a caching layer transparently.

When you ask for a document with a given id, the TryGetFromCache method figures out whether the type supports caching and returns the result from the cache if it's available.

The consumer knows nothing about this layer. We decorated our abstraction and put strong test coverage around just this layer, giving us confidence it does what we expect. Any consumers of IDocumentStore<T> will get these decorations out-of-the-box.

Our developers are now encouraged to take dependencies on IDocumentStore<T> and we have convention tests to help them stop taking dependencies on stores/transactions directly.

Consumers of our Core Platform ask for what they need, mutate it as they see fit, knowing (or not knowing) there's an IUnitOfWork per request that will take care of establishing a transaction when it's needed, and commit that transaction when the request completes (for Git or SQL).

All the separate concerns are handled transparently, so you can focus on your job of delivering great features to customers.

We hope this post provides some insights into the architectural changes that we consider when supporting a feature like Config as Code, to help build confidence and stability for the long term.

Tagged with: Engineering Configuration as Code