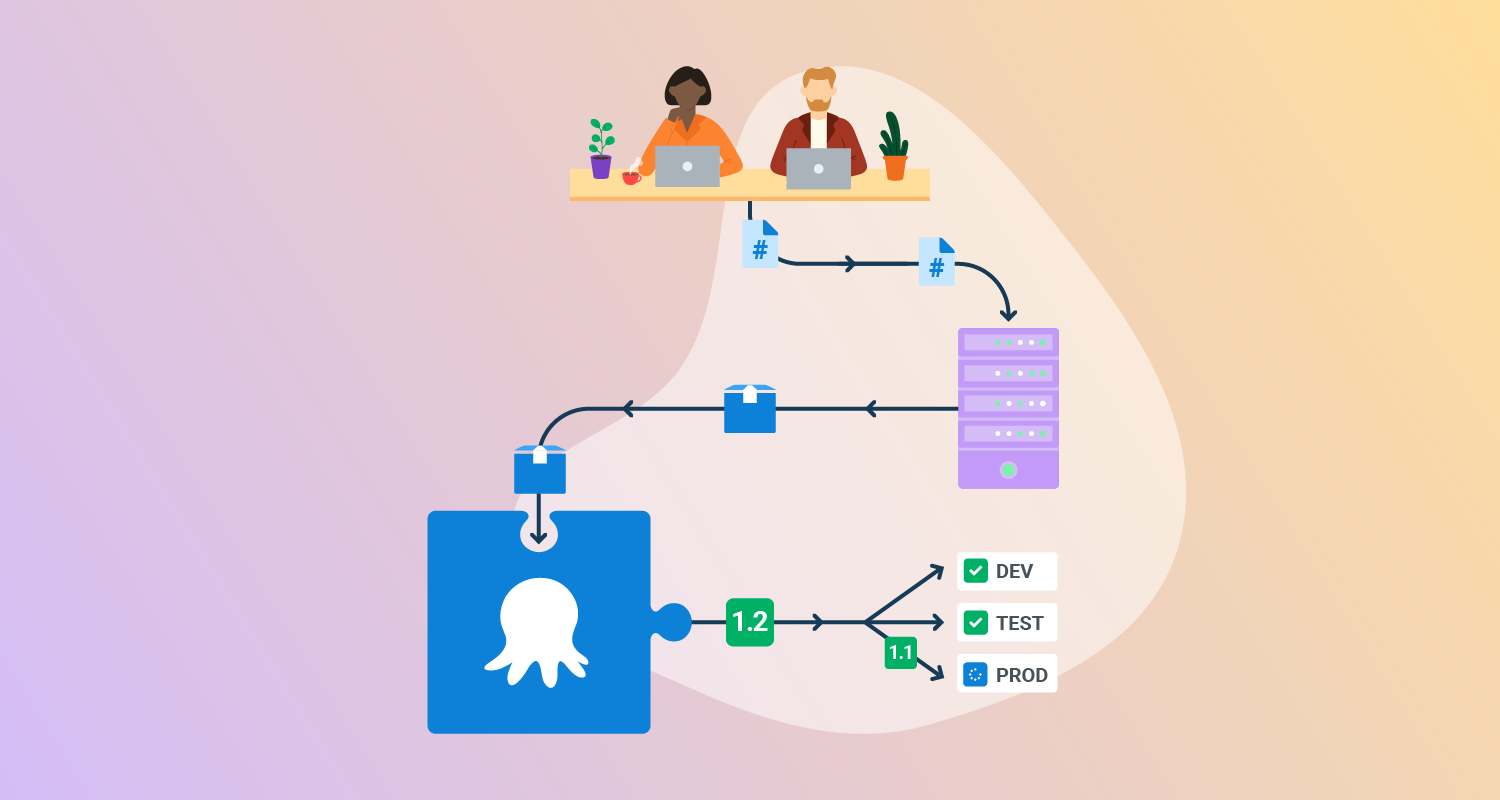 We spent the last few months exploring 2 build server options in Jenkins and GitHub Actions. As we discovered, Jenkins is a traditional build server with a self-managed instance at its center, while GitHub Actions performs similar tasks but as a service in a product you may already use. Either is worthwhile as part of a Continuous Integration and Continuous Deployment (CI/CD) workflow, depending on your needs.

As a deployment tool that sits between packages and their destinations, however, Octopus is build server agnostic. Octopus supports all major automation services on the market, but why should you connect them to Octopus?

Build servers can deploy too, but they don’t solve the same problems Octopus does.

In this post, we look at how Octopus complements your build server of choice and completes your development pipeline.

We talk a lot about CI/CD on this blog. Though ‘CI’ and ‘CD’ combine to make a catchy acronym and share the belief that repetition gives confidence, they’re separate concepts.

CI exists mostly to serve developers. It's about automating tasks that used to slow them down, such as compiling, building, and testing code. These are the same functions build servers excel at, so it’s no accident that many in DevOps refer to build servers as ‘CI platforms’.

CD processes usually touch many teams as a release works its way through a pipeline’s environments. And where CD fundamentally differs to CI is the need for manual intervention at several stages.

Let’s look at how Octopus helps with managing those manual actions.

As a release moves through a typical development pipeline (consisting of at least Dev, QA, and Production environments), you may need the following types of human checks or actions:

In Octopus, you can build manual intervention steps into your deployment processes. For example, if you need a deployment to pause and check for QA confirmation or management sign-off, that’s easy to add.

This helps keep your deployments moving along swiftly.

Sometimes, the people performing manual checks don’t need to see the full deployment picture. You can use Octopus Deploy’s Spaces feature to make sure teams only see what they need.

This provides security around your instance and makes your information clearer by reducing the clutter for everyone. 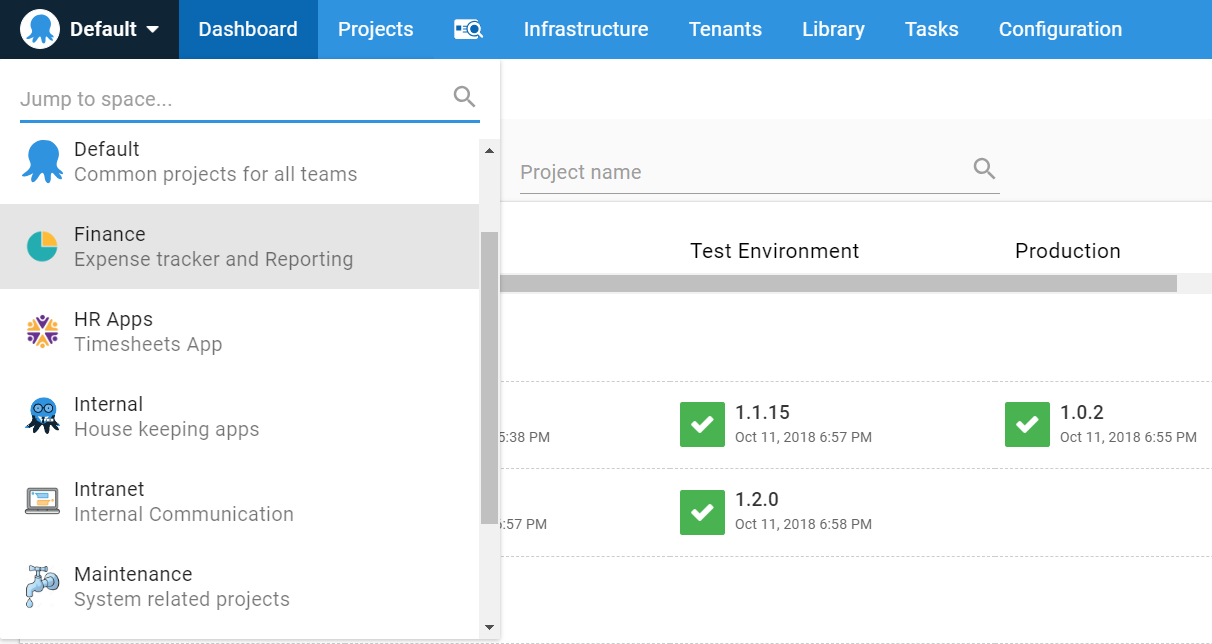 Octopus gives you confidence in releases

Octopus helps provide greater confidence in your releases before they go to production. It does this in a few ways.

While build servers can technically deploy a package to any target, they tend to lack the concept of environments.

An environment is a collection of deployment targets used for a specific purpose, such as regional server farms, virtual agents, and cloud services.

An ideal deployment should flow through at least 2 environments before it reaches users. A minimalist environment structure, for example, looks like this:

Some pipelines may add extra environments, such as User Acceptance Testing (UAT) or Staging. Regardless, the idea is to build confidence in your release before it hits production.

That’s why with Octopus, you deploy to environments rather than each individual target.

If you have complex projects that only need to hit certain targets in your environments, we have tools to help you manage that, such as variables and tenants.

You can have more than one lifecycle, though. For example, you might want special lifecycles for different projects, or use them to help set up a favored deployment pattern. 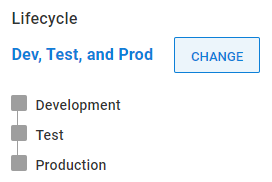 Octopus uses just one deployment process across a project’s lifecycle

With Octopus, you set your deployment process just once per project. Unless you hit problems deploying to Dev, the process will stay the same throughout your entire pipeline.

By the time you’re ready to push to production, you can trust your deployment process because it’s worked before. Repeatable deployments breed confidence! 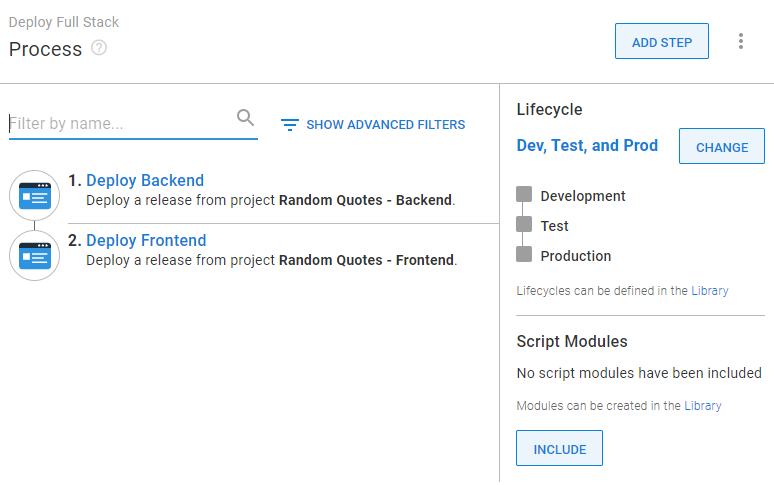 Octopus easily connects to both ends of your development pipeline

We already explored how, thanks to plugins and connecters, Octopus can connect to your build server of choice. You can find our plugins for popular CI platforms on the following marketplaces:

Octopus also easily connects to your deployment targets too. Whether that’s physical servers, containers, or any of the major cloud providers - Octopus can deploy there. We built much of this into Octopus to make it as easy as possible. After you define some environments, set your deployment targets with our simple setup wizards.

If a deployment by build server fails, it’s likely you need to go through logs to find out what went wrong. This is probably fine for the tech-minded, but it’s not ideal for everyone involved in deployments, such as release managers, leaders, or QA teams.

Thankfully, Octopus’s dashboard makes it easy to check what releases each environment has, and across all your projects too. Even during deployments.

Octopus’s Runbooks feature is one of its most useful additions, allowing you to automate a range of routine or emergency operations tasks.

This could include performing:

We'll cover Octopus Runbooks in more detail starting next month, but in the meantime, check out our Runbooks documentation for more information.

Over the course of our series on Continuous Integration and build servers, we covered 2 great options in Jenkins and GitHub Actions. We looked at how they can help your teams and provided setup advice.

We also explained how CI and CD are separate concepts solving different problems, yet are 2 sides of the same coin and combine for something greater.

Finally, we offered insight into how Octopus can help complete your full CI/CD pipeline. But don’t just take our word for it, sign up for a free trial to see it in action for yourself.