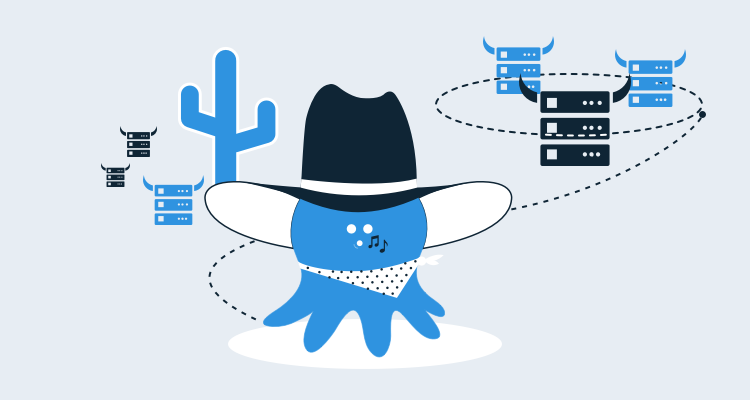 With Octopus-hosted dynamic worker pools, you can spin up an Octopus Cloud instance and run PowerShell deployment or runbook steps on a Windows machine in minutes. Unfortunately, running a bash script on a Linux machine wasn't always as easy.

The lack of support for Linux workers on Octopus Cloud has made us a little sad ever since we launched. You've been able to add your own Linux workers, but it hasn't felt as natural as the built-in support for dynamic workers provided for Windows.

As of today, I'm happy to announce we support Ubuntu workers on Octopus Cloud. This is a step forward for us on our journey to being the best deployment tool for your Windows workloads and for your Linux workloads. 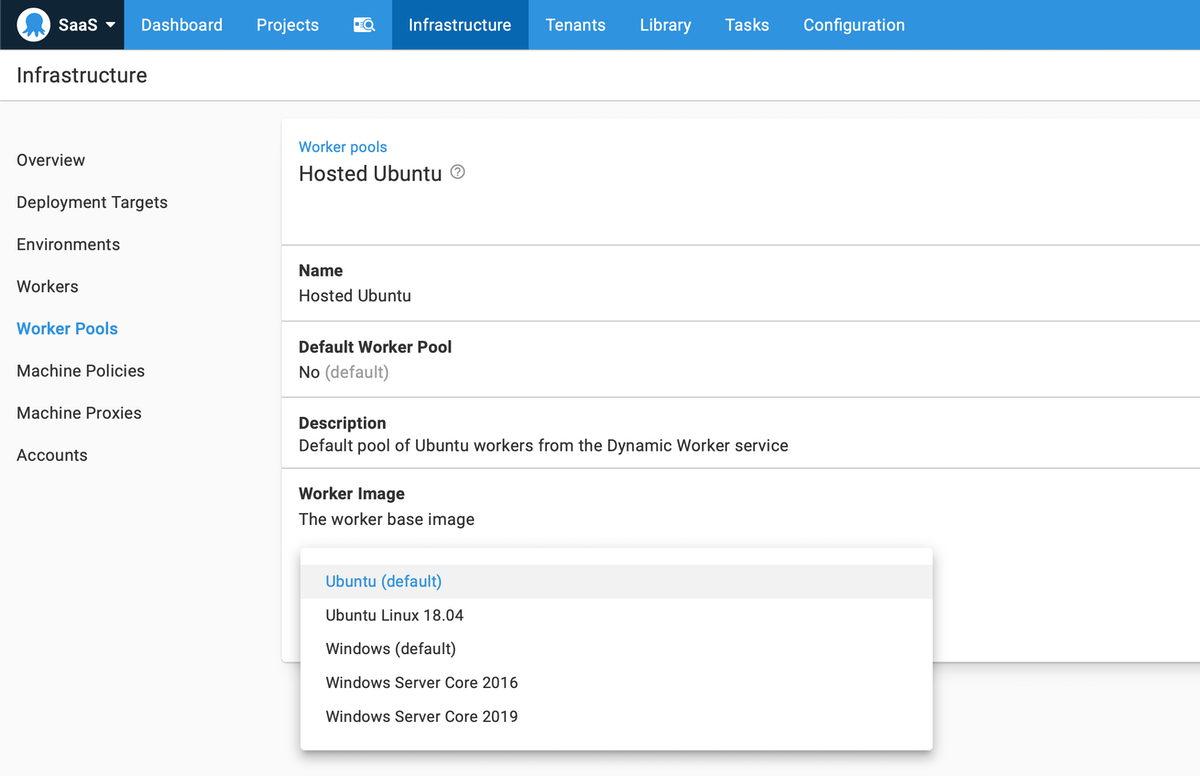 I'm also happy to share, we've launched Windows 2019 workers. We're still in the process of switching everyone over, but you can opt-in to using the new worker images with your instance by navigating to Infrastructure ➜ Worker Pools.

A big positive of switching to the Windows 2019 workers is that Docker is installed as well, so you can make your builds sparkle with your own custom docker images; the only limit is your imagination (oh, and the DockerHub download times).

One thing we're really excited about is that adding support for Docker really opens up our execution containers feature which has been behind a feature flag for a while. This feature is now available for everyone as a part of our early access program.

One last thing, our worker tools containers have also been updated and now support the Terraform 0.13 version that was just released. Check out PR #20 for all the details of available versions.

The next section provides a walk through of running a bash script on a Linux worker. For added points, we'll execute Terraform from inside a container to show how easy it is to use the newest version.

Configure an external feed for DockerHub

If you don't yet have a feed configured for DockerHub, go to Library ➜ External Feeds and hit the Add Feed button. Select Docker Container Registry in the Feed Type field, and give it a name, I called mine Docker Hub.

After you've created your new worker pool, go to the projects tab, and create a new project. From there, go to Runbooks and hit the Add Runbook button and give it a name.

On the process tab, add a new Run a Script step. Choosing Run once on a worker will let you choose your new worker pool and expose a new section called Container Image. 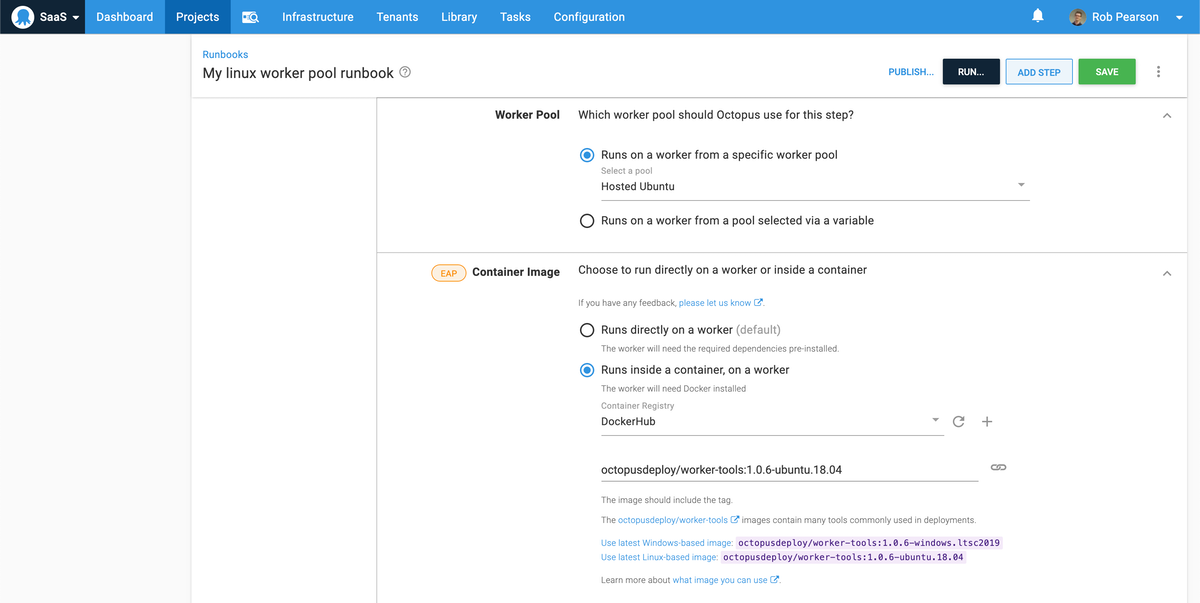 Choose your Docker Hub feed, and then click the Use latest Linux-based image link at the bottom. This will populate the field with the latest version automatically.

Finally, for the script, choose Bash and enter the following script:

Hitting Save then Run will execute the script: 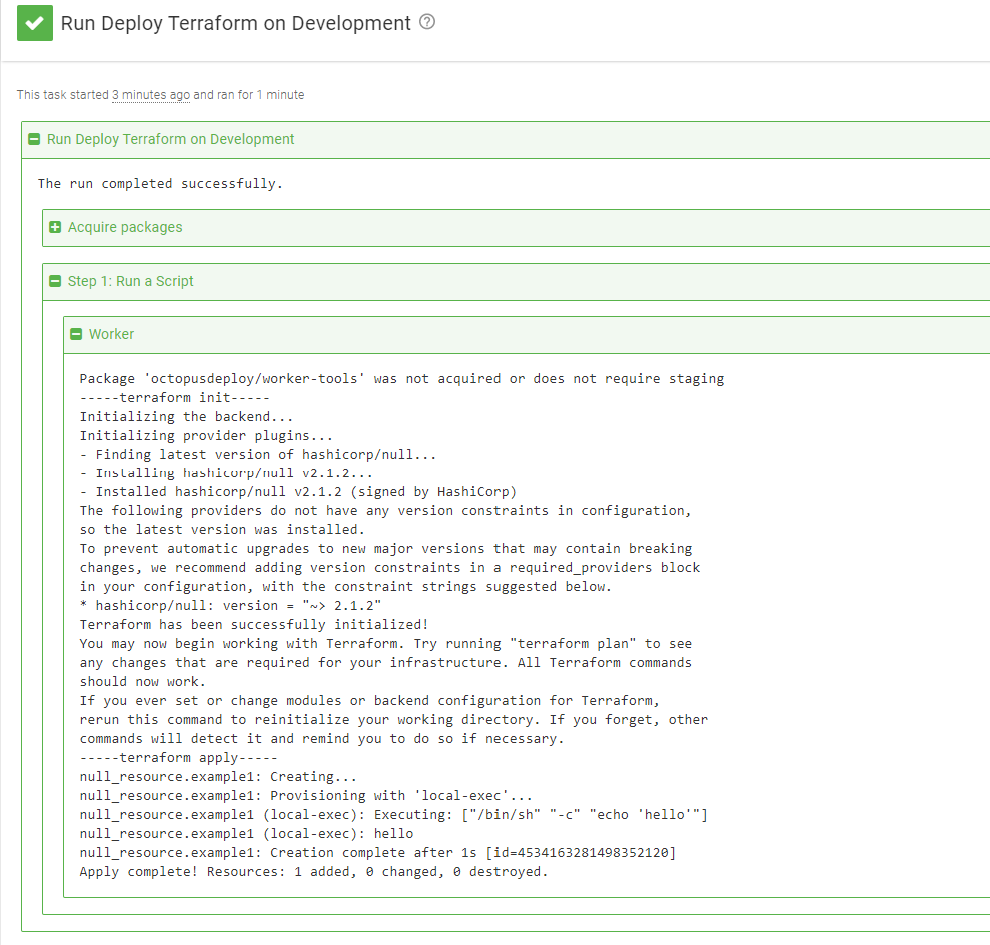 While this script doesn't exactly do much (it echo's out "hello"), it highlights how easy it is to run a bash script and use the latest Terraform version.

We hope you're as excited as we are about these new capabilities. Give it a bash today (pun fully intended) and let us know what you think!