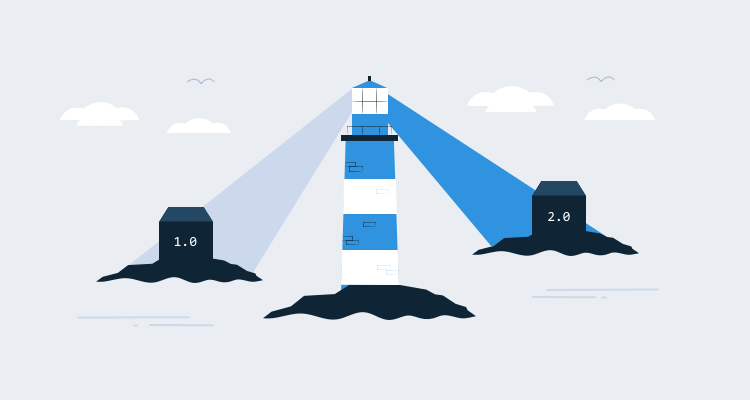 In this post, I show you how to convert an existing application to use the rolling deployments pattern in Octopus with the help of child steps.

I don’t explain how to build the PetClinic application in this post. If you are new to building Java applications, we have a number of guides that include step-by-step instructions to setup CI/CD pipelines for various tools.

For both the sequential and rolling deployment processes, the PetClinic application and MySQL database are hosted in Google Cloud. All of the infrastructure used in these examples, including the servers, load balancer, and databases are re-created regularly using Operations Runbooks.

It’s important to highlight that this post won’t cover every element required for a zero-downtime deployment. It makes some assumptions about the application set-up:

For deployments where you aren’t concerned about application downtime, Octopus caters for this by running steps sequentially one after the other, by default.

Start trigger
It’s also possible to configure your deployment process to run steps in parallel. However, care should be taken to avoid situations where steps running in parallel depend on one another.

The existing PetClinic application is modeled using this sequential deployment technique. The deployment process consists of a number of key steps:

In addition, the deployment process includes steps that will post messages to a Slack channel with deployment progression updates.

The complete deployment process can be seen here: 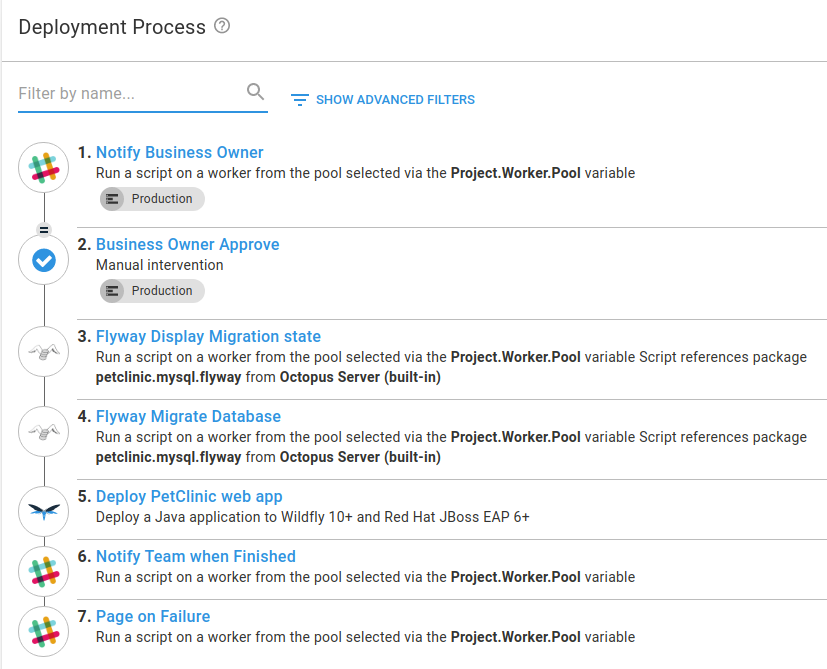 After creating a release in Octopus, you can see an example of the sequential deployment in action to the Development environment: 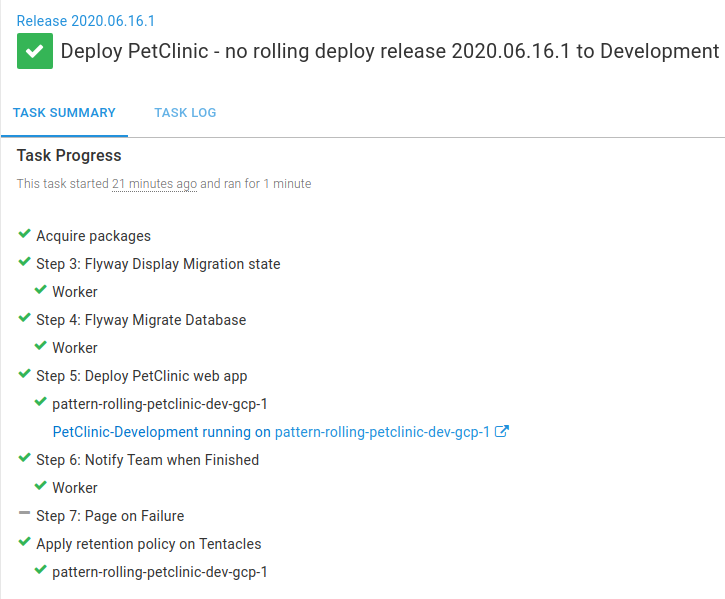 The steps are run one at a time until the deployment is complete. When the Deploy PetClinic web app step is run, the application becomes unavailable to serve requests to users.

Perhaps unsurprisingly, the infrastructure used in these deployments (per environment) looks like this:

Convert to a rolling deployment process

Scale up the servers

In order to reduce downtime and still serve requests for users, we need to scale up the number of servers we use. We also need a load-balancer that we can use to control which servers are available.

This includes a shared load balancer, and this time, two application servers in each environment, connecting to the MySQL database as before.

After you have created your new servers, you also need to add them in Octopus as new deployment targets and tag them with any appropriate target roles.

Previously, users accessed the PetClinic web front-end directly on a single virtual machine. Here, we use dedicated target pools for the Test and Production environments. A target pool is the name given to a group of virtual machine instances hosted in Google Cloud.

In order to change our deployment process, and keep the ability to deploy PetClinic sequentially, we need to create a new project. One way to achieve this is by cloning the existing project.

In the existing project, under Settings, use the overflow menu (...) and select Clone: 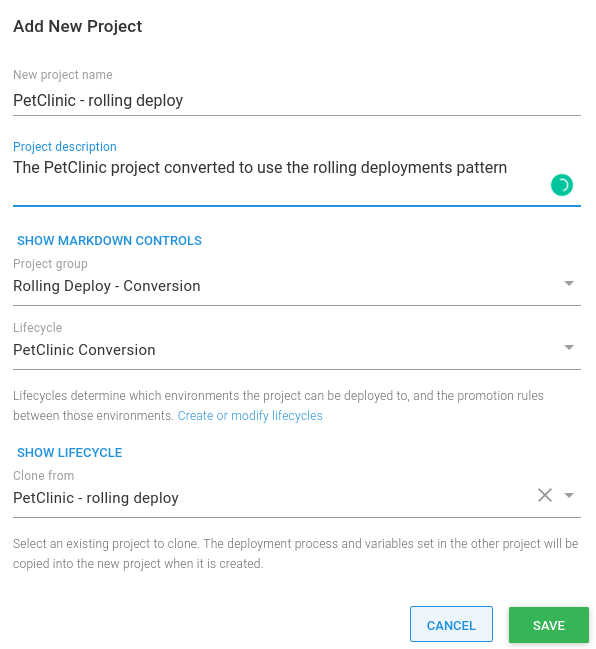 Choosing what to convert
It’s important to decide for yourself what elements of your project’s deployment process should be converted to use a rolling deployments pattern. In certain situations, it could make things harder to deploy.

To convert the Deploy PetCinic web app step to a rolling deployment we perform the following actions: 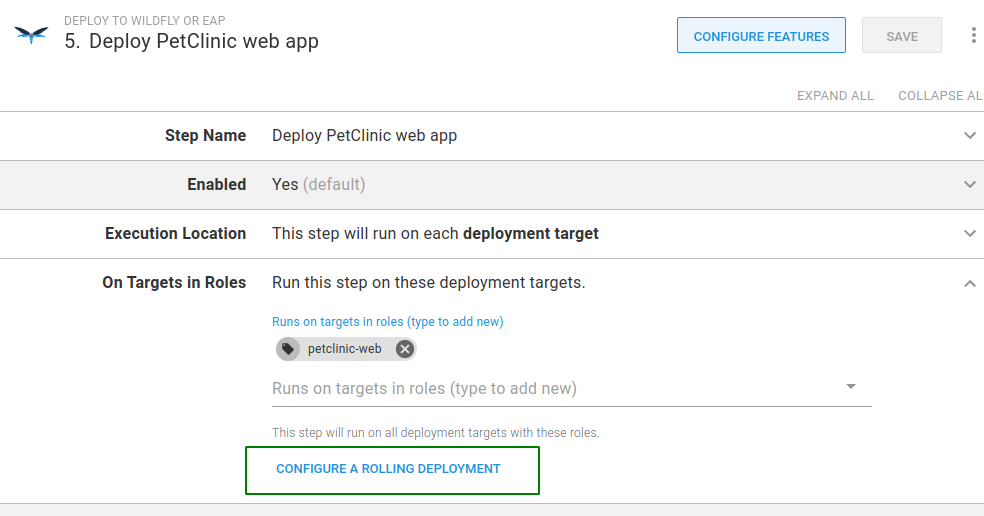 We’ve configured a rolling deployment, but it’s not very intelligent yet. Currently, the process deploys PetClinic to each server one at a time, taking each instance of the application offline as it deploys.

We need to add new steps to our rolling deployment to safely deploy new versions of the PetClinic application to each virtual machine and continue serving traffic to users on the other server.

In Octopus, adding multiple steps to a rolling deployment process is done with child steps.

gcloud CLI and authorization
Most of the commands used for interacting with Google in this next section make use of the Google Cloud CLI. To use the gcloud CLI you usually need to authorize it. For further information on gcloud authorization, please refer to the documentation.

To add a child step, we open the overflow menu (...) for the existing Deploy PetClinic web app step and select Add child step:

We are presented with the Choose Step Template selector where we choose the required step type.

Next, I’ll walk through the new child steps needed to complete the rolling deployment process. Some of the script examples have been reduced to the minimum needed to highlight the key parts.

This script step is required so that we can identify the name of the virtual machine hosted in Google Cloud for use when removing and adding to the load balancer. We do this by querying Google with the gcloud instances describe command:

If a match is found using the machine identified by the Octopus system variable Octopus.Machine.Name, the script sets an output variable with the name as recorded in Google Cloud:

Remove the machine from the load balancer

When we have the name of the machine we are deploying to, we need to remove it from the load balancer target pool. However, to prevent an attempt to remove the virtual machine from the target pool when it’s not present to start with, we can run the gcloud target-pools describe command to check:

If the instance is found in the target pool, we run the gcloud target-pools remove-instances command supplying the instance name with the --instances parameter:

After the virtual machine has been removed from the load balancer, we can proceed to deploy the PetClinic application.

We don’t need to add a new child step to deploy the PetClinic application, as it already exists. Instead, we will place that step in the right place after we have added the necessary child steps.

After the PetClinic front-end has been deployed, we can test if it’s responding to requests by adding a community step template called HTTP - Test URL as a child step.

We use a variable of #{Project.Wildfly.Url} to test that it returns an HTTP 200 OK response. This will tell us if the application is running. Any other HTTP response will result in a failure.

Add the machine to the load balancer

Lastly, when the PetClinic application has been verified as online, we can add it back to the load balancer target pool. We do this by running the gcloud target-pools add-instances command and supplying the instance name (as before) with the --instances parameter:

After all of the child steps have been added, you can reorder them if necessary. In our case, we need to move the original Deploy PetClinic web app step to the middle so that we don’t deploy the application to the virtual machine until it has been removed from the load balancer.

To reorder the child steps: 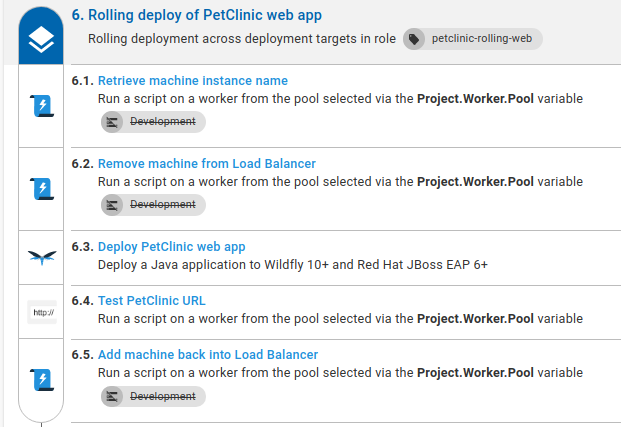 You can see an example deployment to Production using the new rolling deployment process: 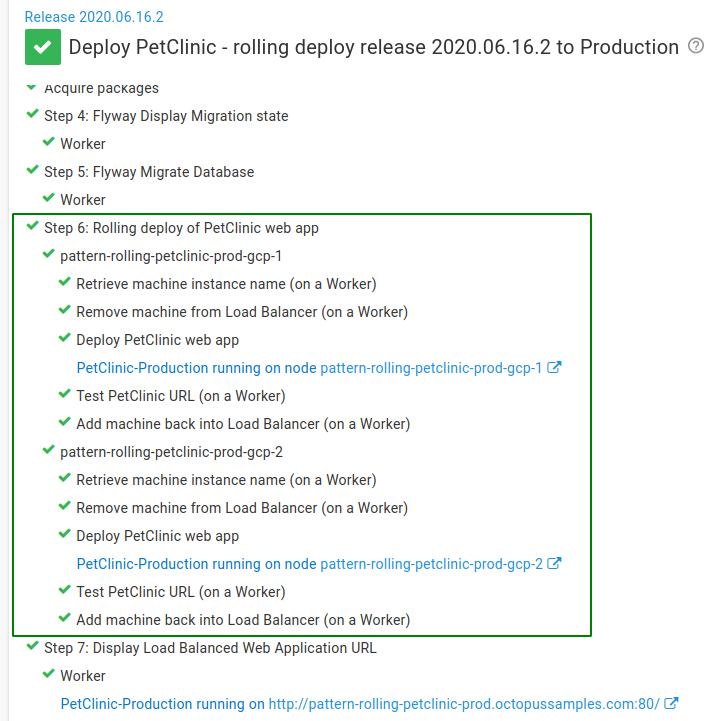 Switch over to new infrastructure

In order to use our new infrastructure, we need to direct our users to our application via the load balancer. The simplest way to do that is to adjust your DNS records. In the case of PetClinic, I just need to adjust the DNS A record to point to the load balancer and wait for the DNS changes to update.

Changing any DNS records may result in a period of time where users are still connecting directly to the virtual machines. This is usually no more than 24 hours, but this will depend on your DNS provider and how long the DNS changes take to propagate.

As you can hopefully see from this post, with a few steps, you can switch from a sequential deployment process in Octopus to one using the rolling deployments feature. This allows you to benefit from reduced downtime, safe in the knowledge that your application can remain online to serve requests to your users.