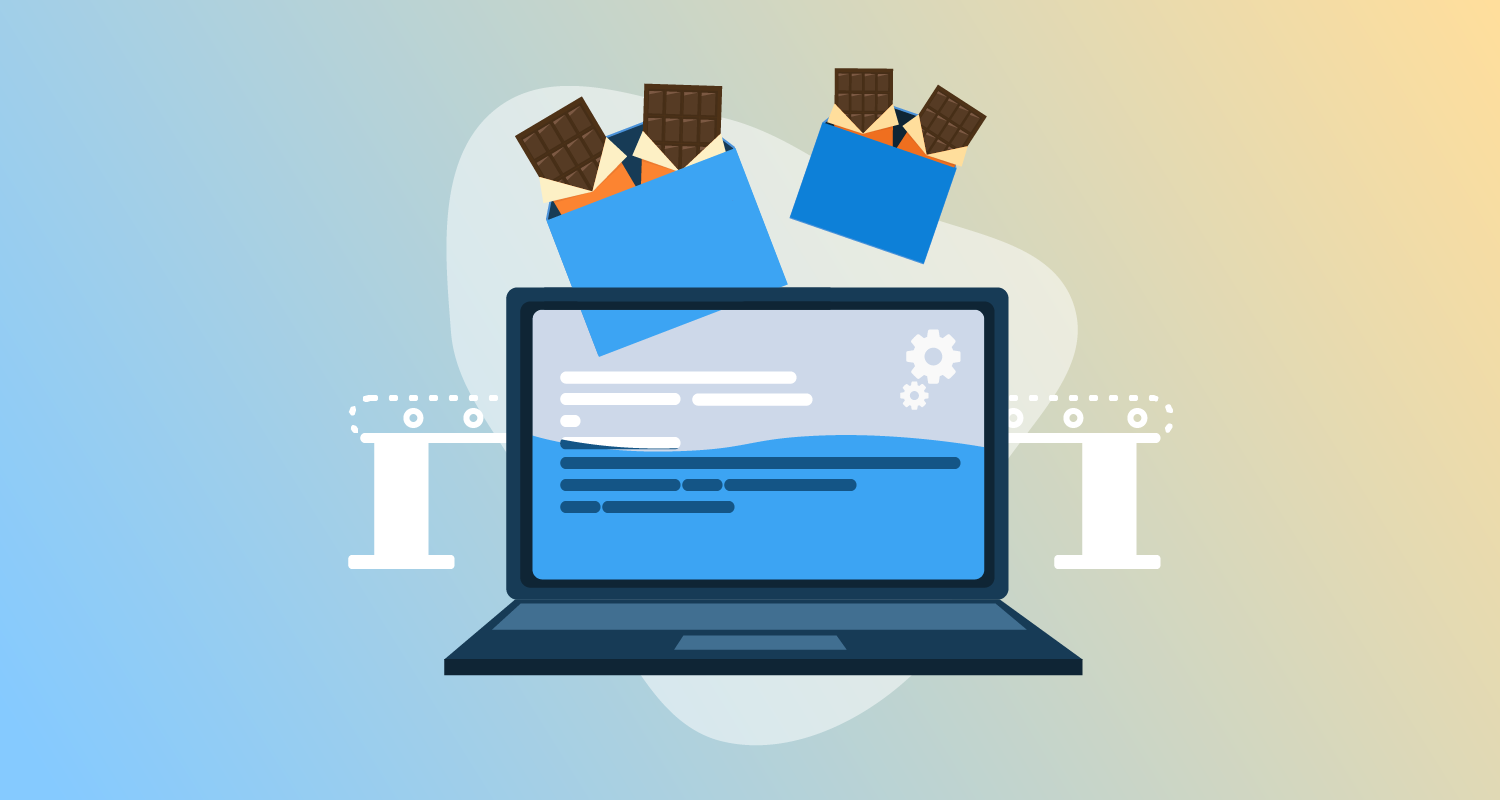 Runbooks automate routine, commonly performed tasks. One of those tasks is the setup and installation of Windows servers.

In this post, I demonstrate how to set up and install developer dependencies on a Windows server using Octopus Runbooks. The runbook can be executed to set up any number of Windows machines.

Chocolatey is a package manager for Windows. It’s an open-source project that provides developers, operations, and everybody in between a way to manage, install, and upgrade software across their Windows estate.

Chocolatey focus on making Windows software more straightforward, streamlined, and accessible to everyone using a Windows computer. To find out more about installing Chocolatey without runbooks, check out the Chocolatey install doc.

You don’t need runbooks to use Chocolatey, and it’s as simple as opening an administrator Windows PowerShell window and running a script to install something like Google Chrome:

If you want to install more than a single application, you can write PowerShell scripts and execute them locally:

You can extend this to all your required applications, and source control the script somewhere with read access so the script can be run by users or during machine provisioning. This automates most of your application installation.

Chocolatey is an open-source tool, and you can get lots of pre-configured packages from the site. In my experience, though, most organizations write their own packages and you can do this too. Chocolately provide information about creating your own Chocolatey packages, if you're not familiar with the process.

The main reasons to write your own package are:

If you're creating your own package, consider sharing it with the Chocolatey community.

To install Octopus Deploy as a Chocolatey package, run the following:

You still need to configure Octopus after using Chocolatey to install, but you can automate the installation.

Why use Runbooks and Chocolatey?

Runbooks is my favorite Octopus feature. With my operations background, I appreciate how it automates mundane and time-consuming operations tasks.

Let’s be honest, how many times can you install IIS or SQL before it becomes tedious and error-prone?

Chocolatey with Octopus Runbooks also enables self-service for applications. You can grant people access to the Octopus project and the runbook so they can run their own installation of Chocolatey packages.

You can use runbooks to automate the following tasks, so you can focus on more interesting problems:

Tools to install the operating system

This post doesn't cover installing the operating system on your Windows server. There are great tools that you can use to load the latest Windows desktop and server operating systems, and this post assumes you added the Octopus Tentacle as part of that process.

Some tools I've used when prepping Windows servers include:

Before you start, you need to install an Octopus Tentacle on your server.

As part of the new space configuration, I did the following: 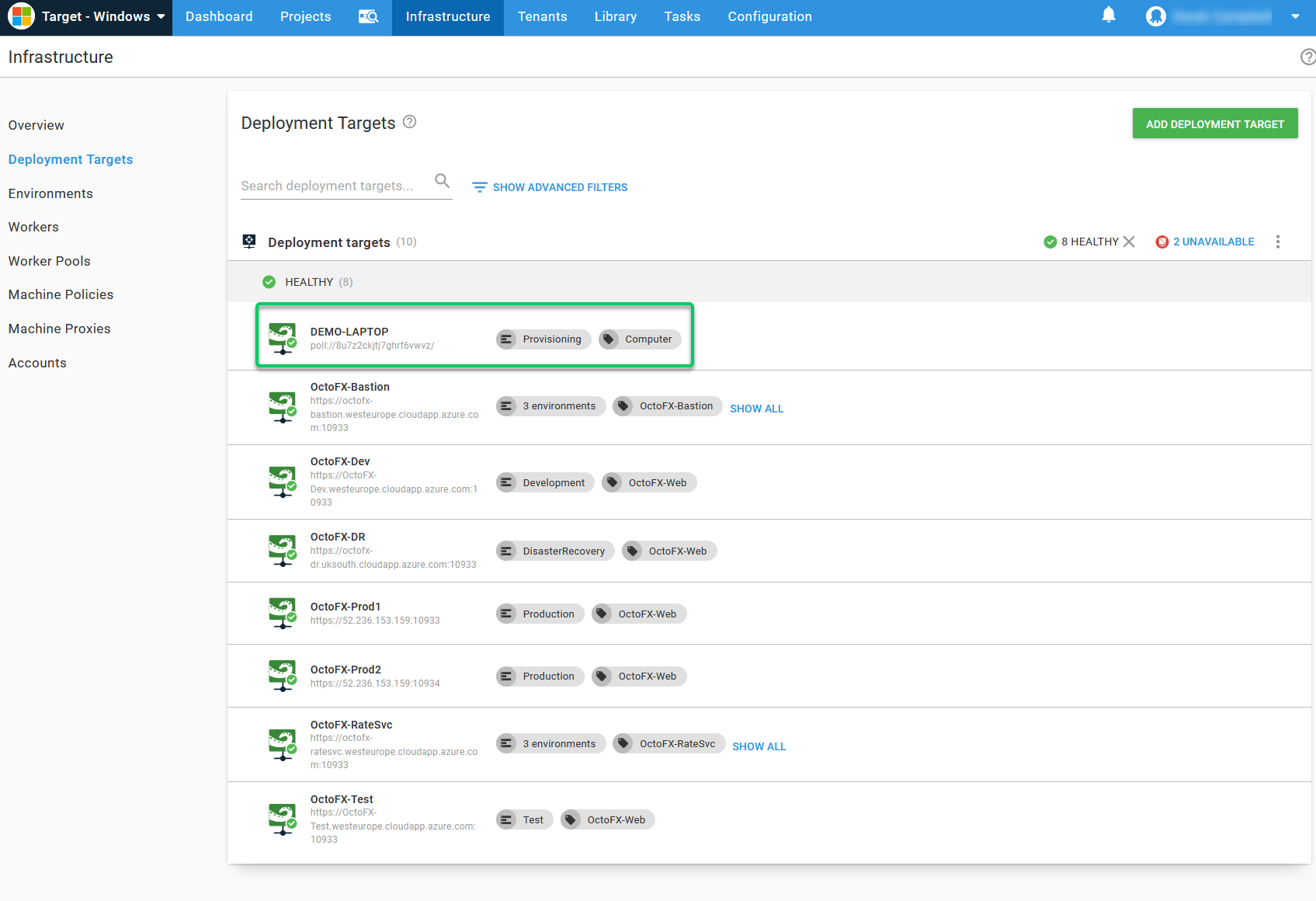 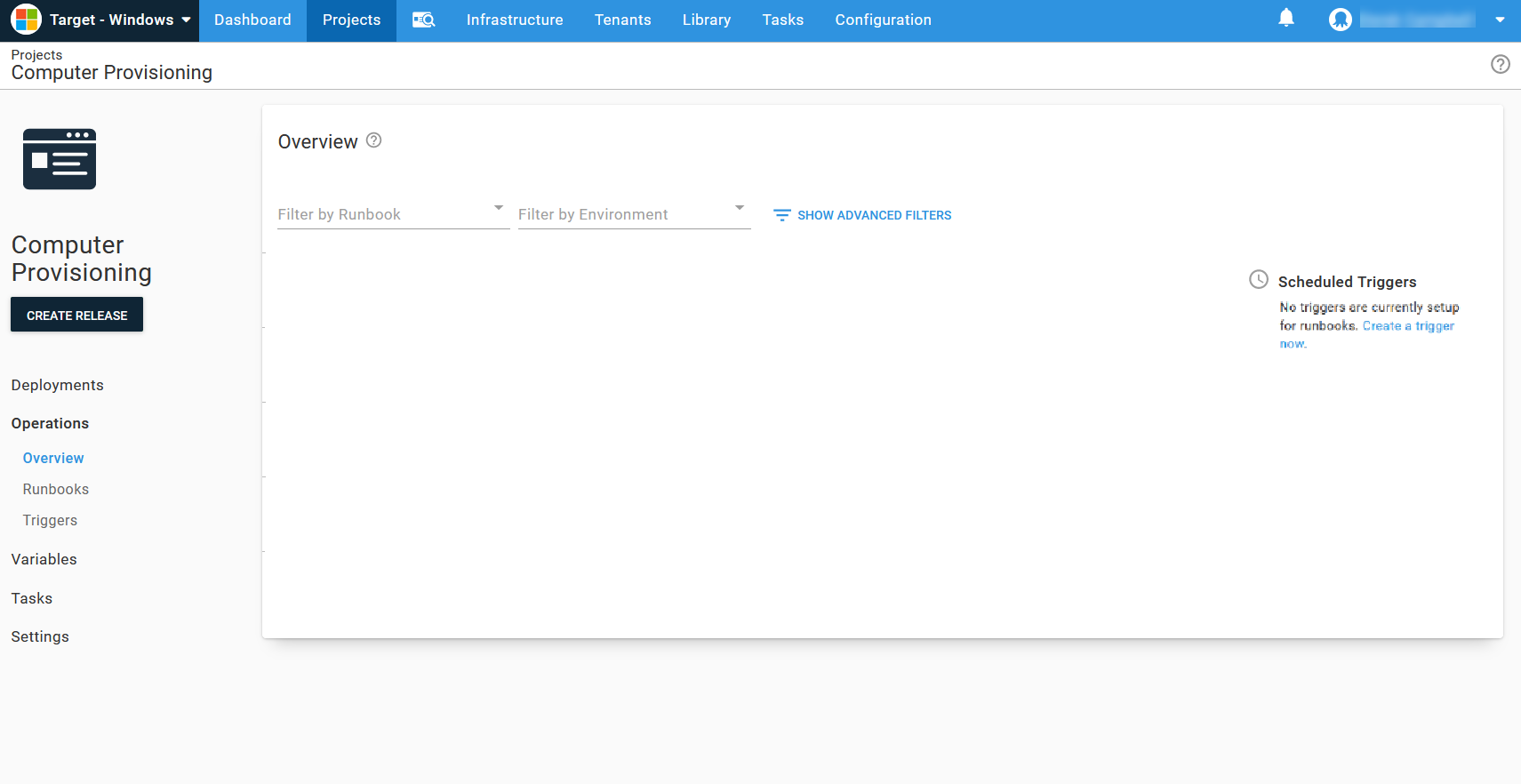 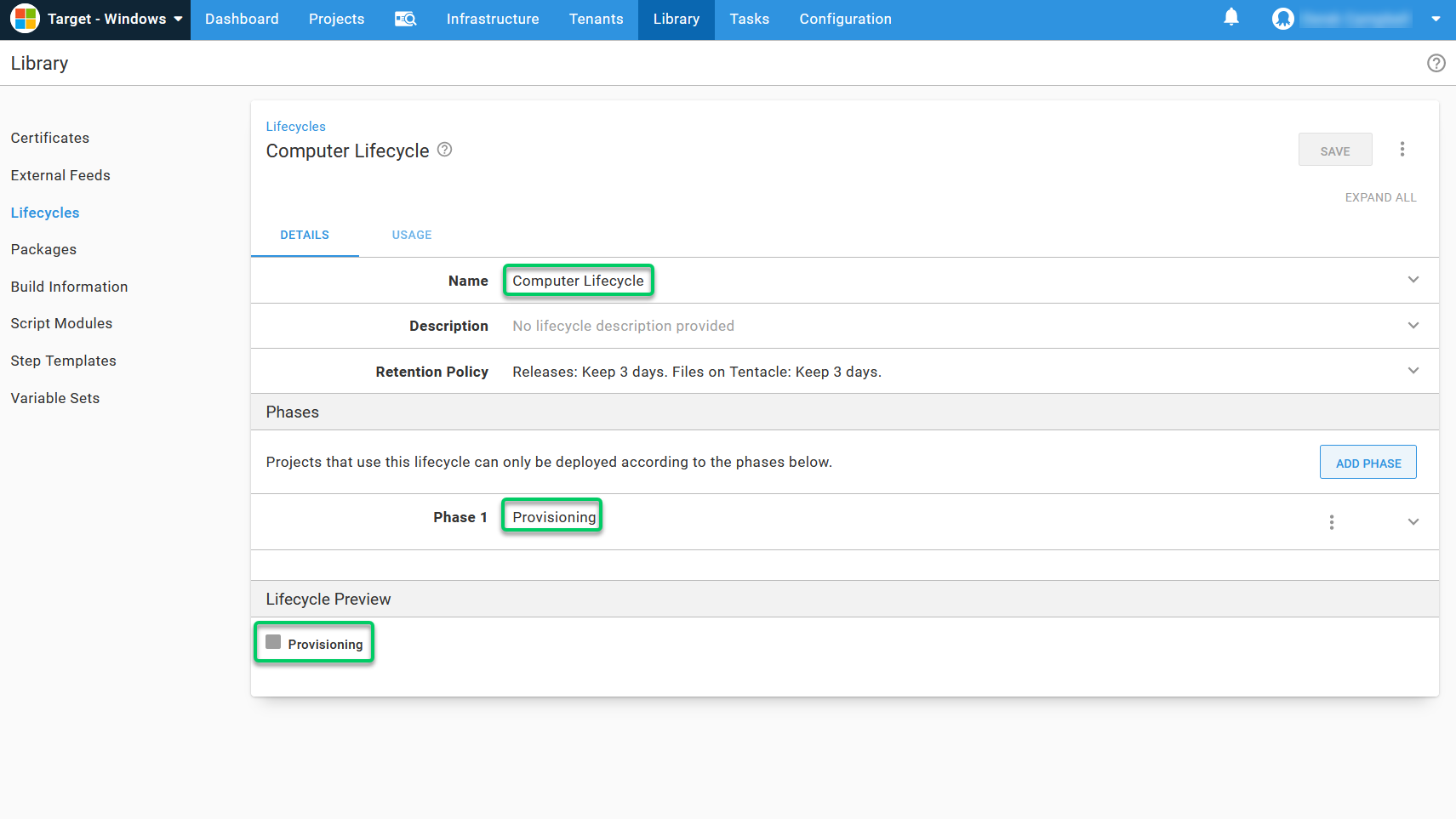 First, you need to find the project and add the runbook: 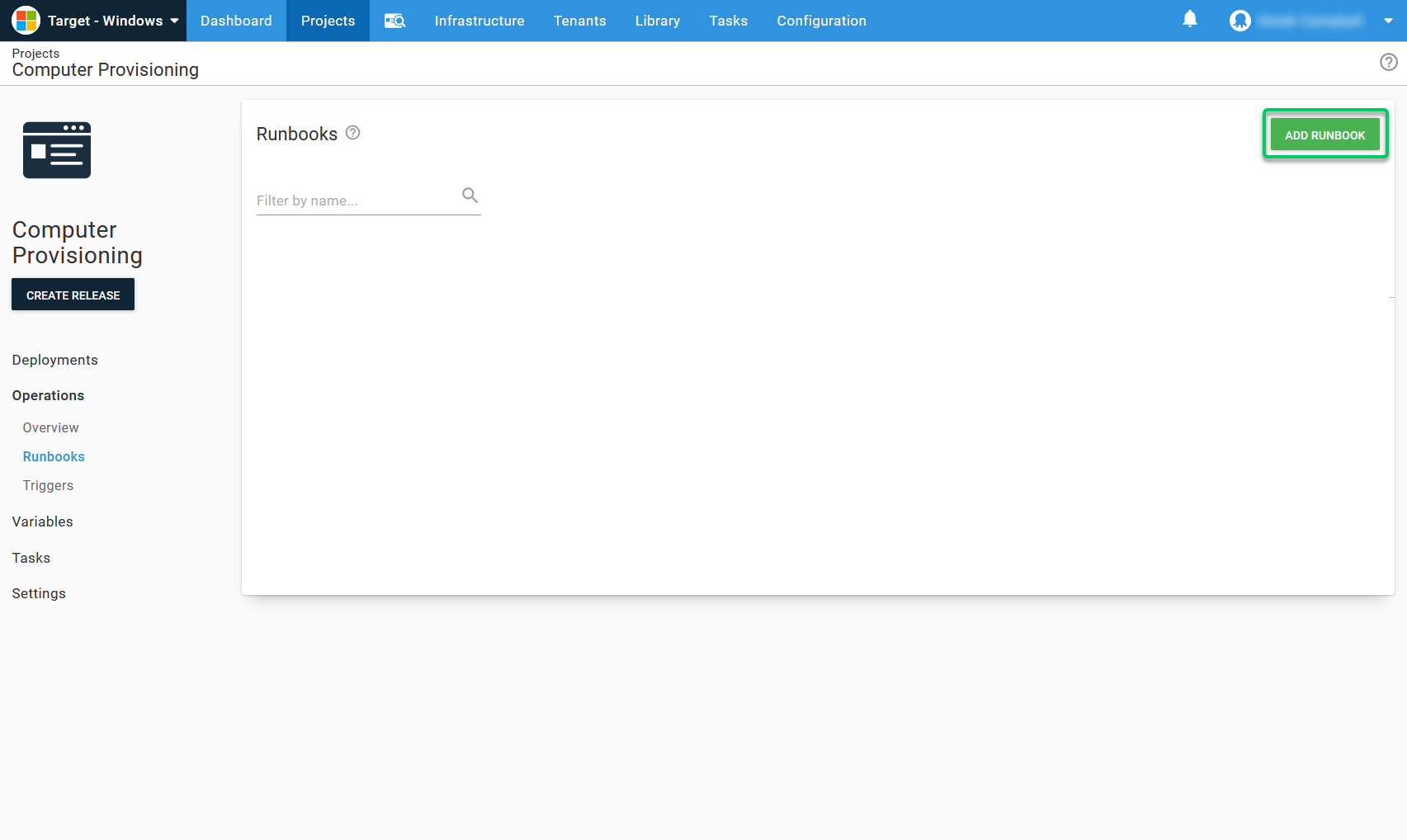 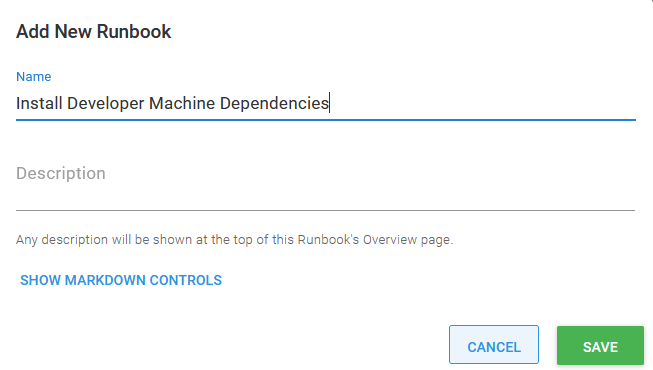 When setting up Windows, it can be frustrating configuring your non-default regions. I use a PowerShell script to set this for all servers. You can use my example below and tweak it to your requirements:

A US equivalent, on the East Coast, would look something like this:

Checking if Chocolatey is installed

Next, I used a community-contributed step template called Chocolatey - Ensure Installed. This step checks whether Chocolatey is installed and installs it if not. 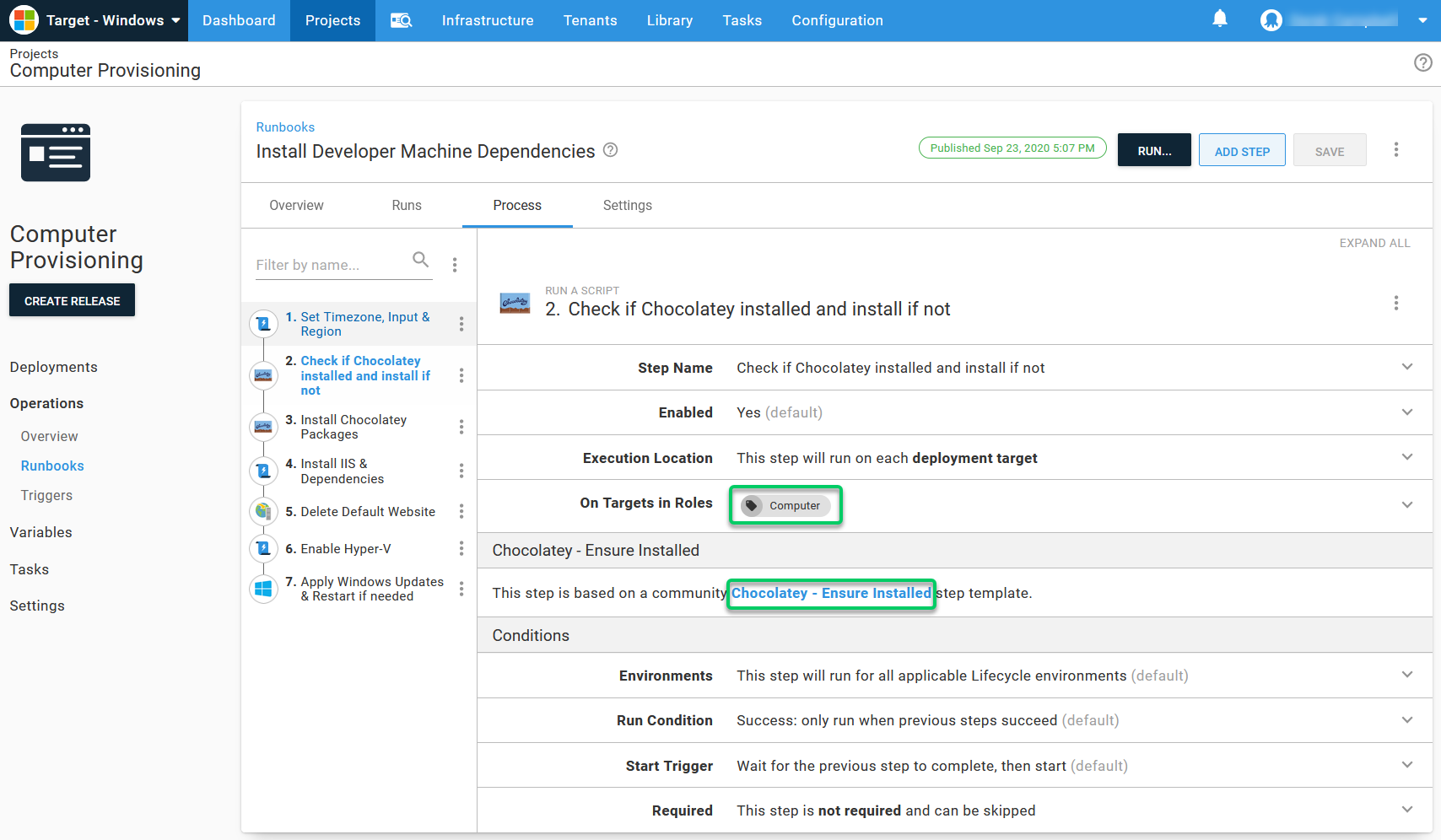 The applications I need on the Windows server are: 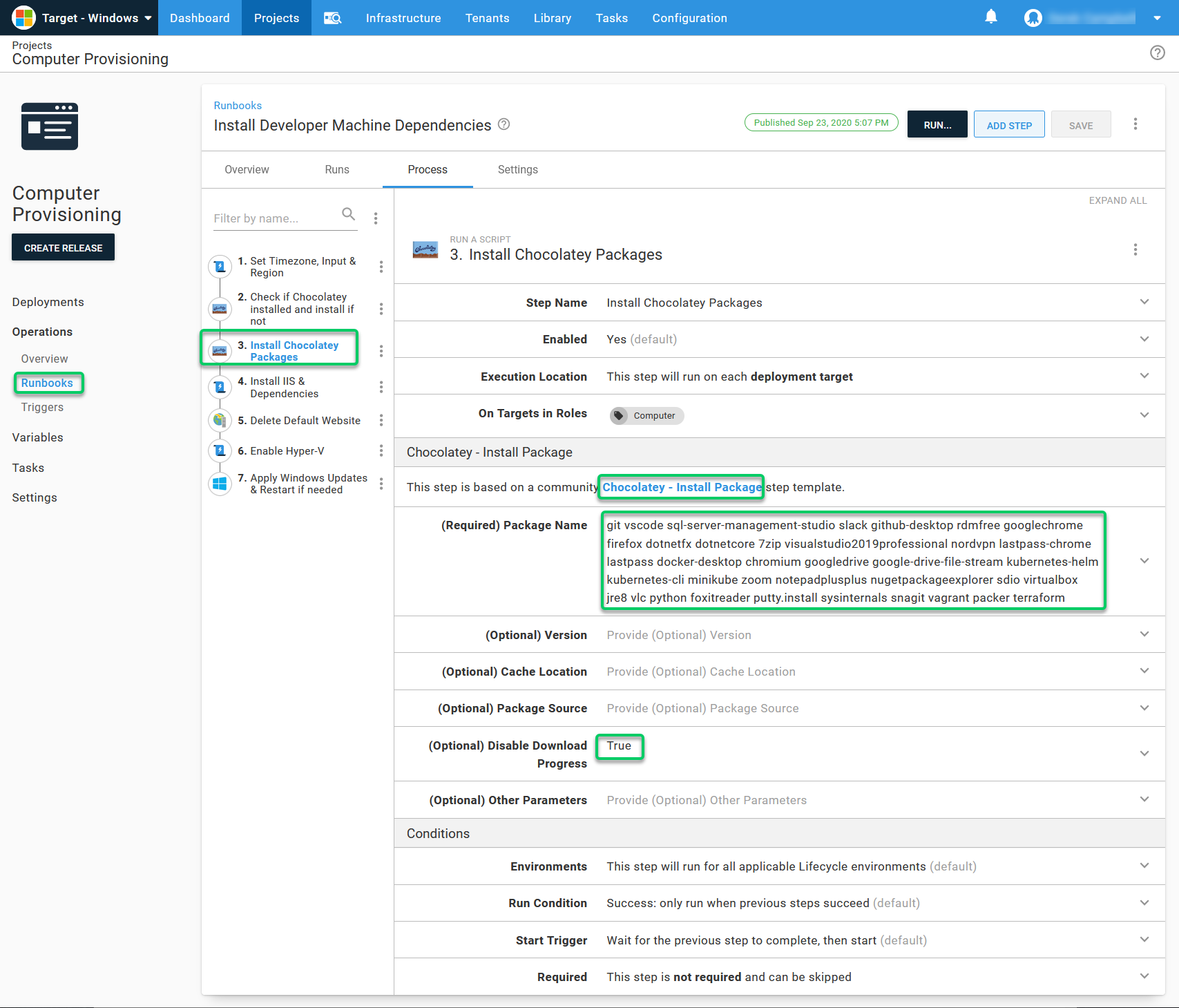 The following parameters are available:

You can specify whether you want to disable the download progress in your logs. I usually enable this option to avoid thousands of log files. The last option allows you to specify additional parameters: 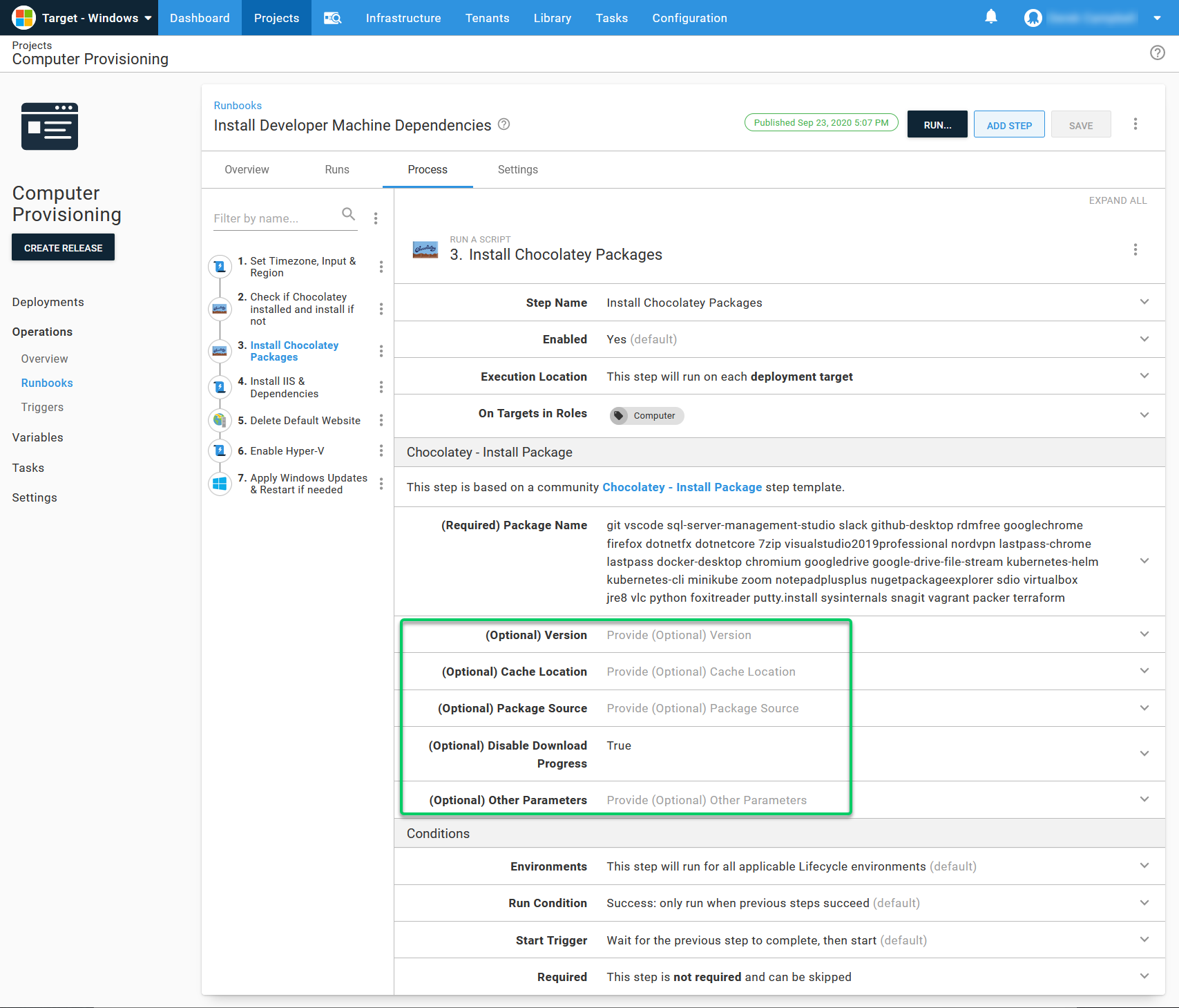 The next step is configuring IIS and its dependencies. I used our IIS Runbooks examples and ran this install IIS, and all of its features.

I prefer to avoid the default website in IIS, so I remove it by default. I use the community step template called IIS Website - Delete and then specify Default Web Site. It removes the Default Web Site as part of this provisioning runbook in Octopus.

I use HyperV as hypervisor when possible, and enable it as part of the server provisioning process. I use the Run a Script built-in template for this task and use PowerShell to enable HyperV:

Finally, I avoid installing all of the Windows updates released if my server is prepped. I use a community step template called Windows - Apply Windows Updates, that automatically installs and reboots your machine if you set the parameter to True.

Runbooks can be in a draft or published state. You need to publish the runbook before you can execute it.

You have the space, the project, the lifecycle, the environment, the server, and the runbook in Octopus. The next step is running and testing the runbook to ensure it does what you want it to.

To run the runbook: 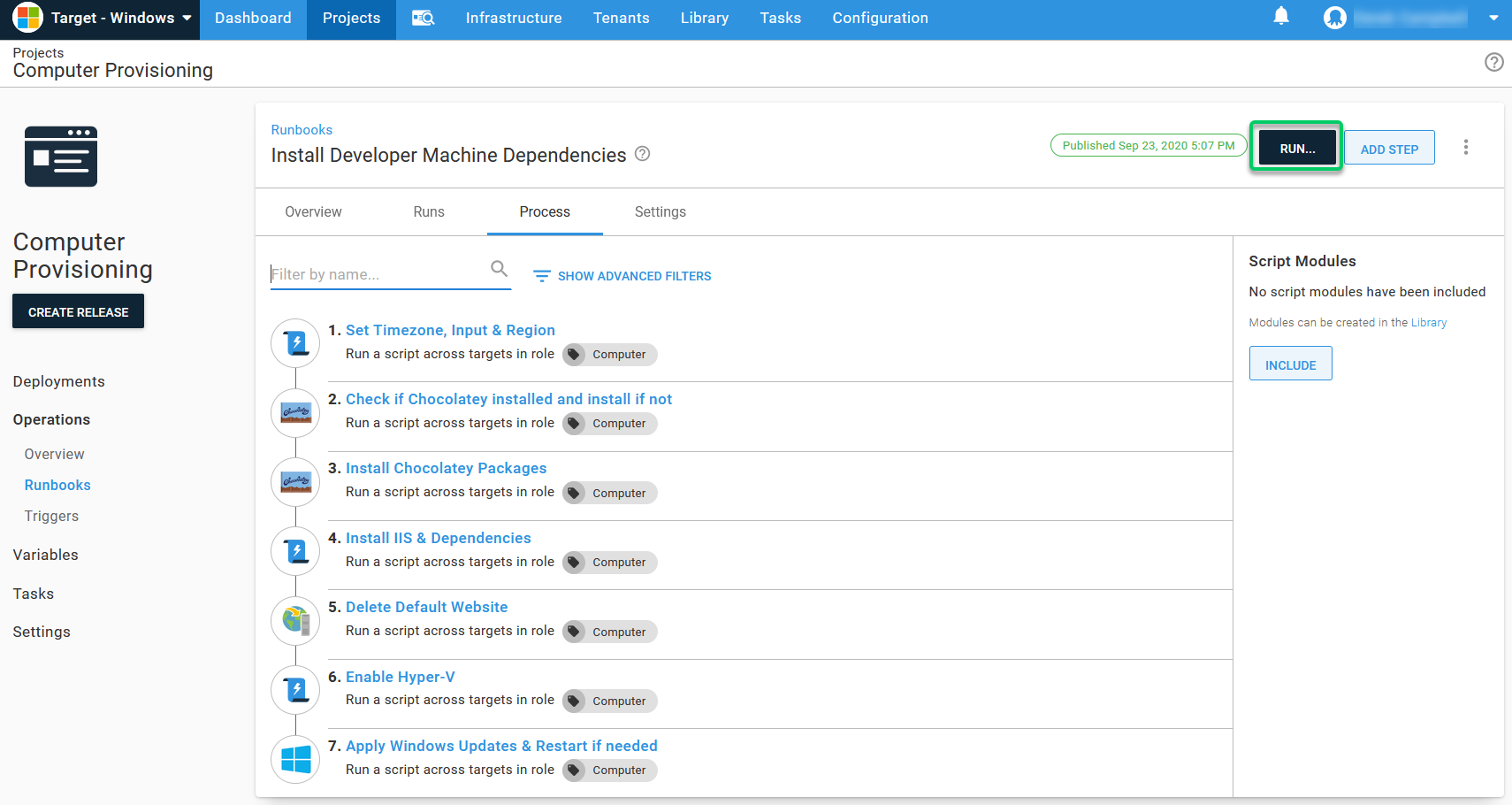 You can grab a coffee now because it takes time to install the applications and dependencies. After your coffee, the runbook should be complete. Your server will be fully configured and you can avoid the pain of next, next, finish installs, and application configuration. 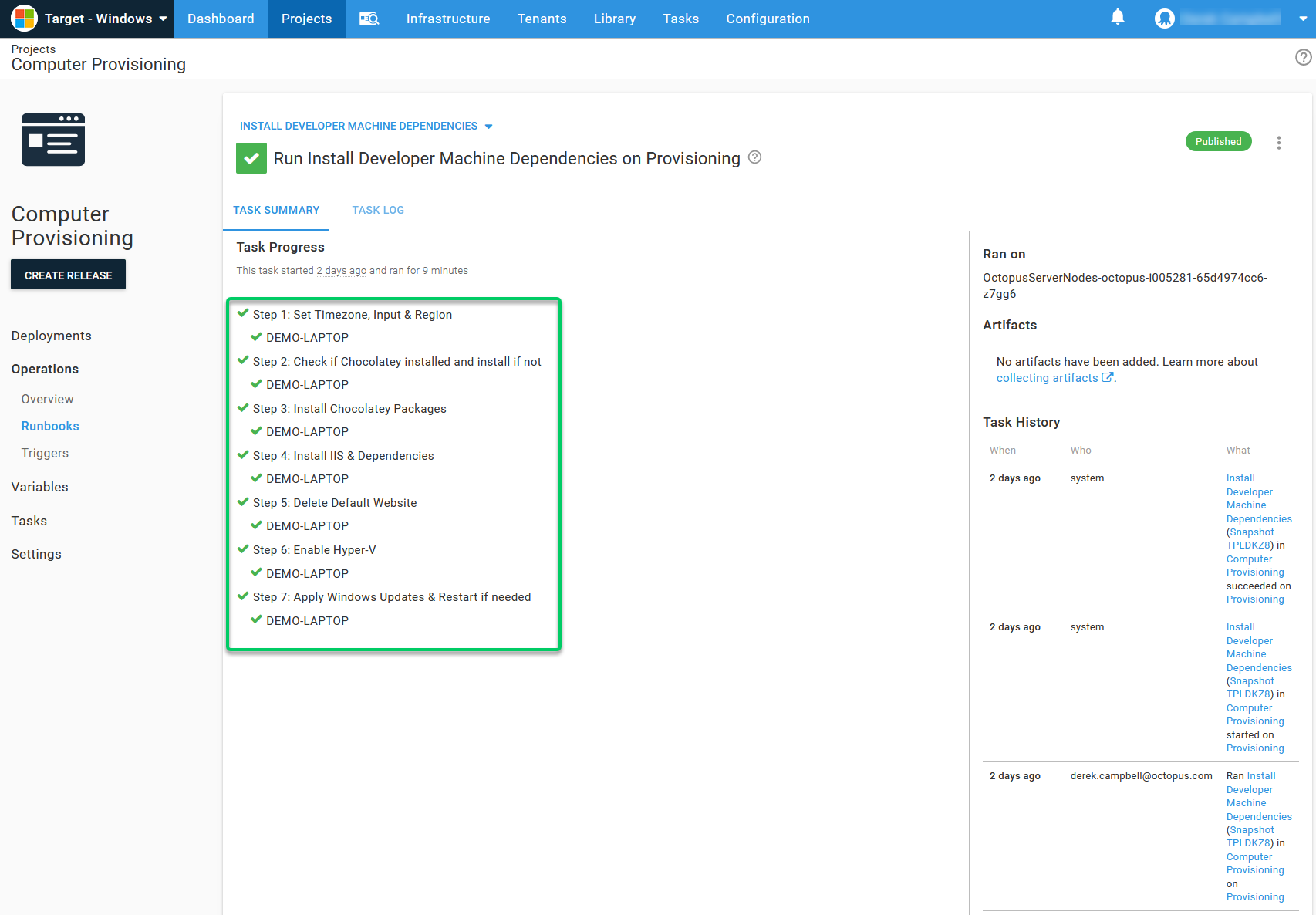 Now you see all of the new applications installed on your server.

Using Runbooks in other scenarios

Runbooks are useful for installing applications, not just for ops, DevOps, and developers, but other job types too. You can create additional runbooks for other job types that need different applications. For example, a business analyst may want PowerBI, and a DBA might wish to install SQL Toolbelt. You can even allow people access to runbooks to install and configure pre-approved software.

You can also use this approach for all of your servers, so you can install SQL on a database server, or Tomcat on a web server.

When installing SQL, create your own Chocolatey package. SQL is trickier to install as it requires an administrator account to install quickly, and you want to configure things such as default users, groups, and locations of the database and log files.

When using Octopus to install SQL Developer Edition or SQL Express, you can do it without the Tentacle running as a local administrator. You still need to use the optional location for the files.

Another gotcha is that if you run the install under a service account with a named service account, by default, it uses that user as the default SQL administrator. You need to connect with that account to give yourself access.

One of my favorite features of chocolatey is upgrading software to the latest version with just one command:

This command runs on the server, checks the latest version against the Chocolatey repository you configured, downloads the new package, and installs it. It's like a Windows update but for your Chocolatey package. You can set this up with runbooks, using the Deploy a Script step, and using the upgrade command: 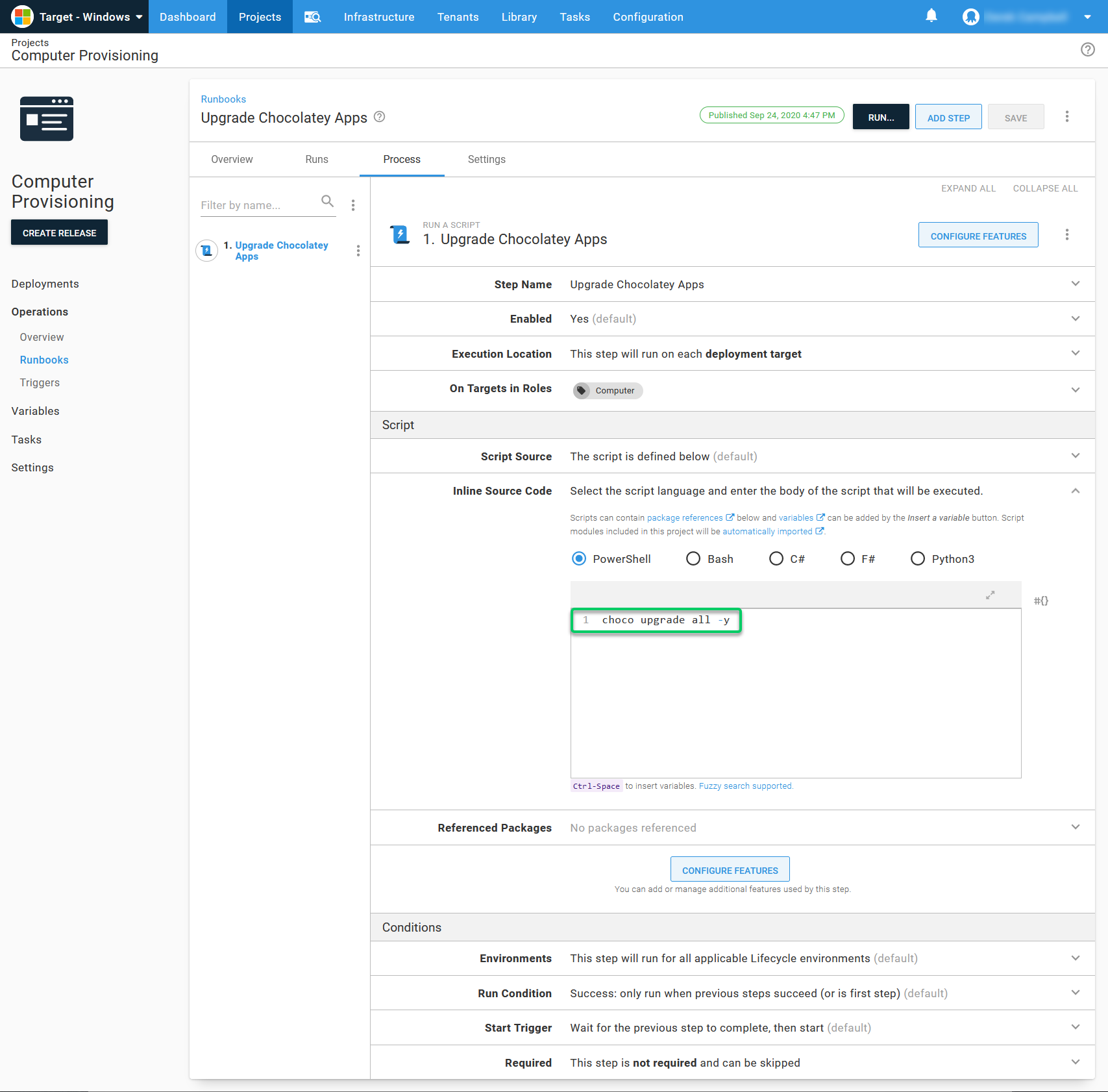 After you create the runbook, select Run, and it runs the Chocolatey script and upgrades all of your applications: 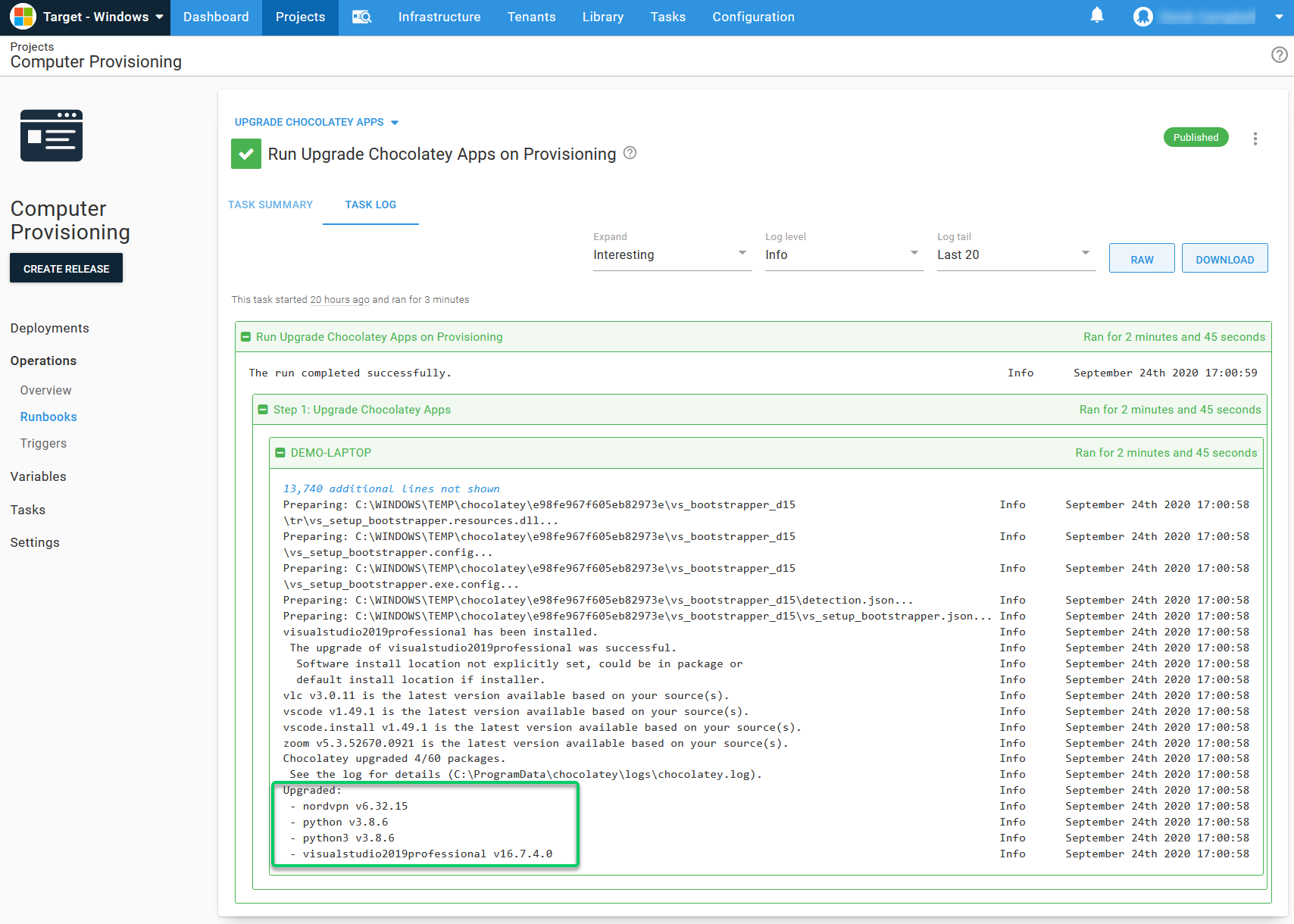 With the upgraded Chocolatey runbook working, you can publish the runbook and set a schedule to execute the script, much like a CRON JOB or a Windows Task Scheduler.

To set this up, select the triggers option under Operations, and select ADD SCHEDULED TRIGGER. 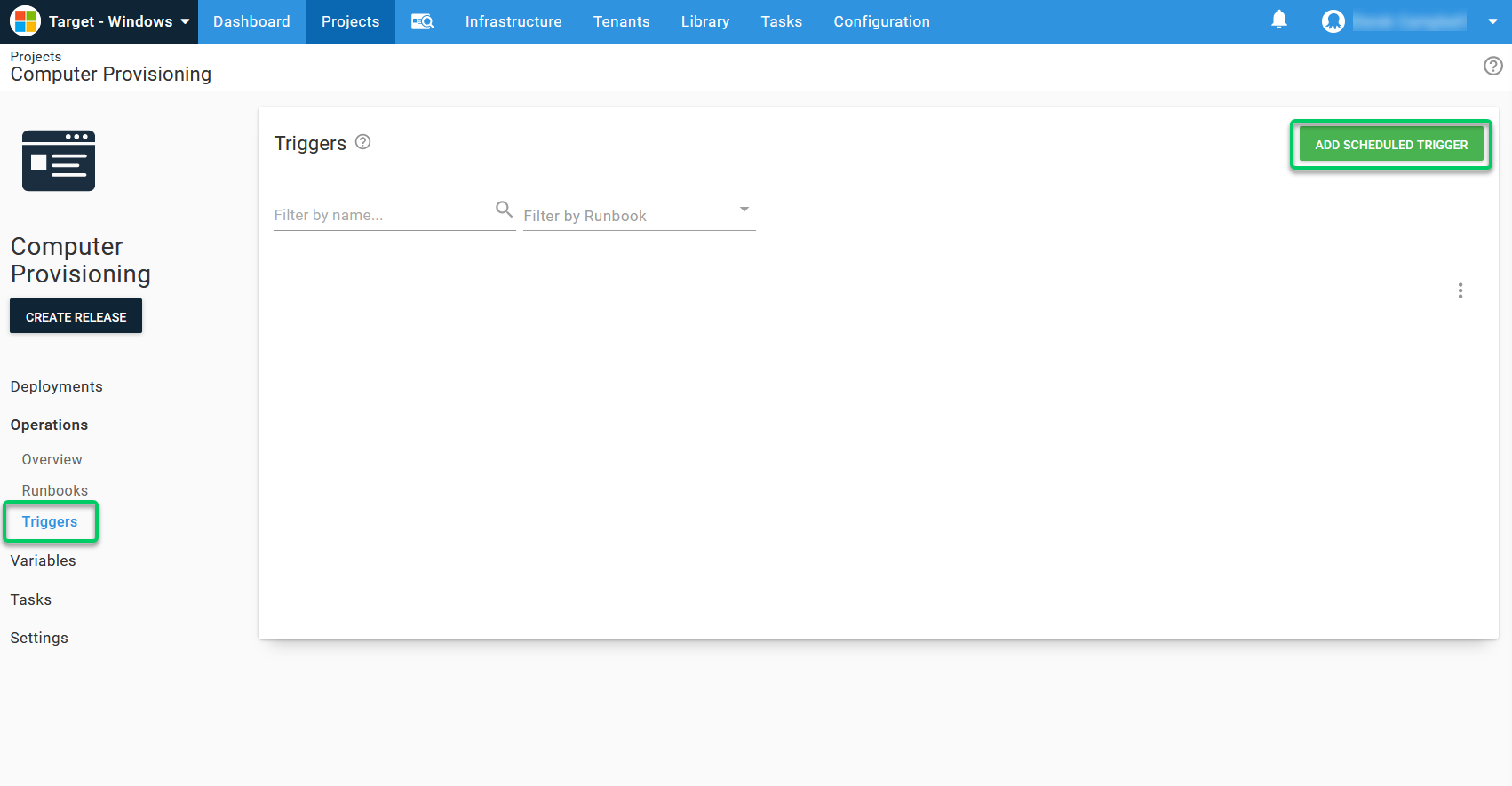 On the New scheduled trigger page, you need to enter: 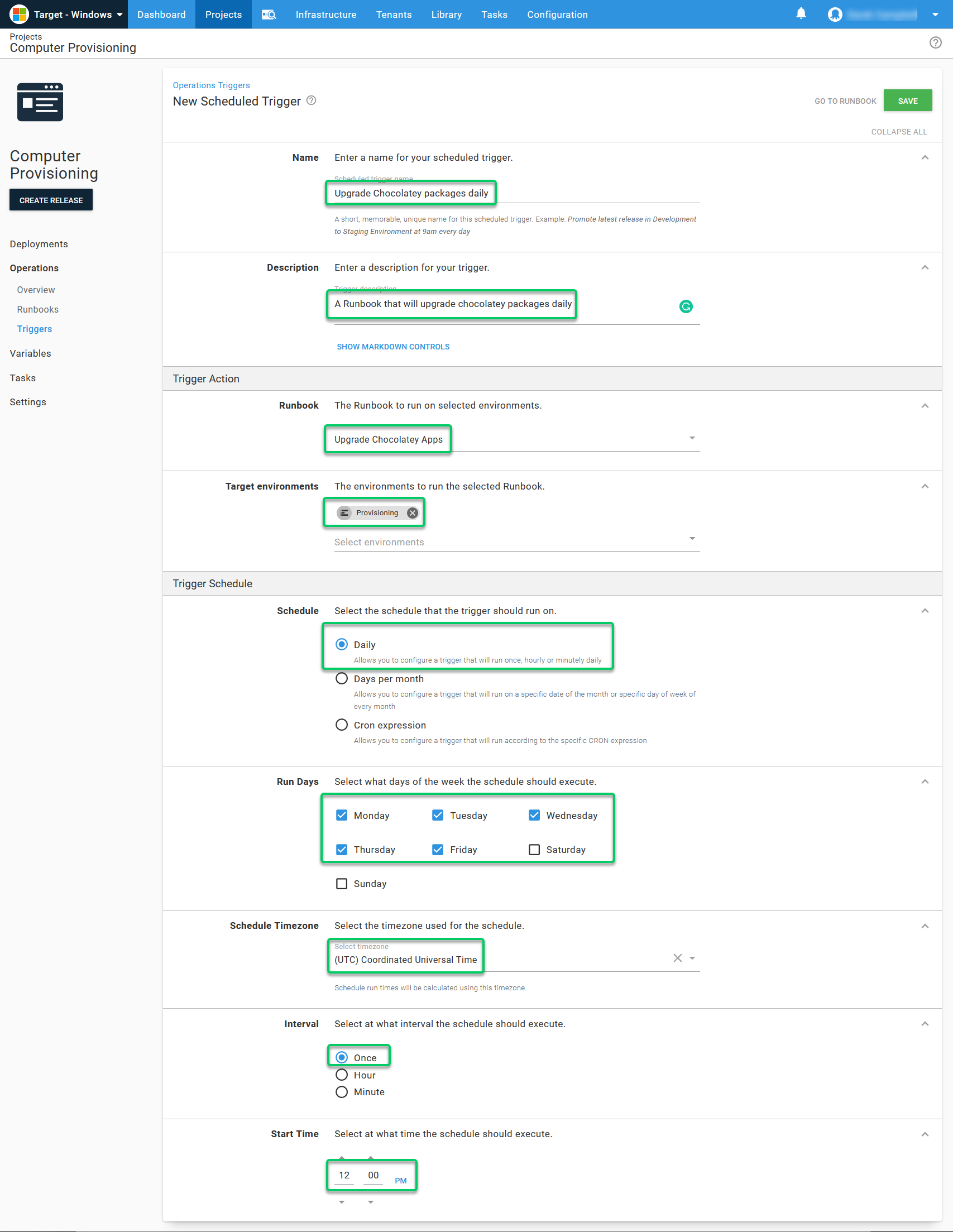 This triggers daily at the time you set. I selected 12.30 PM as that’s when many people go to lunch.

All of the configuration in this post can be found on our samples instance by logging in as a guest and selecting the Target - Windows space.

Octopus Runbooks and Chocolatey work well together, giving you the flexibility to automate the installation and configuration of servers both on-premises and in the cloud. They eliminate the need to install thousands of applications across your organization’s infrastructure.

To see this in action, watch our webinar, Automating your infrastructure & applications with Runbooks and Chocolatey, with Paul Broadwith from Chocolatey.