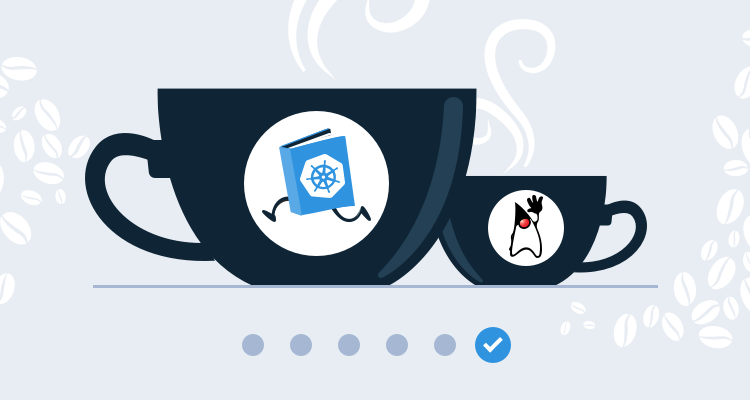 In the previous blog post we integrated Jenkins and Octopus to trigger a deployment to Kubernetes after the Docker image was pushed to Docker Hub. We also added additional environments in Octopus to represent the canonical Dev ➜ Test ➜ Prod progression. This left us with a deployment pipeline with automated (if not necessarily automatic) release management between environments.

Before we can create runbooks for database backups, we need a database.

In a production setting you would typically use a hosted service like RDS. RDS provides out-of-the-box high availability, backups, maintenance windows, security, and more, all of which requires a significant effort to replicate with a local database. However, for the demonstration purposes of this blog, we’ll deploy MySQL to EKS and point our PetClinic application to it. We can then script common management tasks against the database to demonstrate the kind of continuous operations that keep a production deployment running.

Adding new tools to an image is easy. We take the base mysql image and run the commands required to install the AWS CLI. Our Dockerfile looks like this:

We then build this image, push it to Docker Hub, and create and deploy a release in Octopus with the following Jenkinsfile. You will note that this Jenkinsfile is almost an exact copy of the previous one, with changes to the name of the Docker image and the Octopus project that is deployed:

The MySQL Kubernetes deployment YAML is also very similar to our previous example, with a new image name and the addition of two environment variables to configure the database credentials and create an initial database:

Deploying the resources created by the YAML above results in a MySQL instance accessible from other pods in the cluster using the hostname mysql.

To configure PetClinic to use the MySQL database we need to define four environment variables. These variables are used to configure the settings in the application-mysql.properties configuration file:

The YAML for our new PetClinic deployment is shown below:

We now have a MySQL database and have configured PetClinic to use it as a data store.

Perhaps one of the most obvious tasks to perform in the continuous operations phase of a DevOps lifecycle is backing up the database.

The MySQL Docker image documentation provides an example command to backup the database with mysqldump run inside the active container with docker exe. We’ll take that example and rewrite it as a call to kubectl exe to perform the backup on a running pod.

The PowerShell script below finds the name of the MySQL pod (which, due to the fact the pod is created as part of a deployment, has a random name), calls mysqldump to create a backup of the database, and then calls aws s3 cp to upload the backup to S3:

This script is executed in a Run a kubectl CLI Script step added to a runbook:

The result of executing the database backup.

We don’t want to manually backup the database, so Octopus allows runbooks to be scheduled. Here we have a trigger to perform a daily backup:

While it took some processing to find the name of the pod to perform the backup, this script is not particularly complicated, and seasoned system administrators have no doubt seen far more intricate management scripts than this. Nor is the ability to run a script on a schedule all that ground breaking.

The real advantage of this approach becomes clear when you consider the different teams who will need to interact with this infrastructure over the lifecycle of the application.

Because Octopus has already deployed to our infrastructure, we don't need to duplicate credentials or other settings like URLs to manage the infrastructure. It's all already in Octopus.

Runbooks eliminate the need for additional tools and configuration settings that might be otherwise maintained on a specialized support laptop, meaning on call support personnel can execute these runbooks from a web browser (on their phone if necessary) with a click of a button. Because the execution of these runbooks is captured in audit logs, and the output of the steps is captured in the history of the runbook runs, you don't experience the same difficulties uncovering the root cause of issues, that you would if the operations team had to run ad-hoc scripts from their own workstations.

All this means the business knowledge required to support production systems is now captured in testable and repeatable runbooks, making support handover easier as all teams share the same toolbox.

When saved in a runbook, those dozen lines of PowerShell represent a shared, verifiable, audited, easily accessed, and centralized unit of business knowledge designed to keep your systems running at their best.

Let’s take a look at another example, this time restarting the PetClinic application.

The script below finds pods whose names start with petclinic and deletes them. Because these pods were created by a Kubernetes deployment, they will be recreated automatically, essentially performing a pod restart:

Commands like kubectl delete can be daunting if you’re not familiar with Kubernetes. It just so happens that because of the way our application was deployed, this action will restart the pods rather than delete them permanently. But how would a new member of the DevOps team know that this command is safe?

By adding descriptions to runbooks we can provide guidance on when and where runbooks can be run. In the screenshot below you can see the description of the Restart PetClinic runbook makes it clear that this is something that can be run in production: 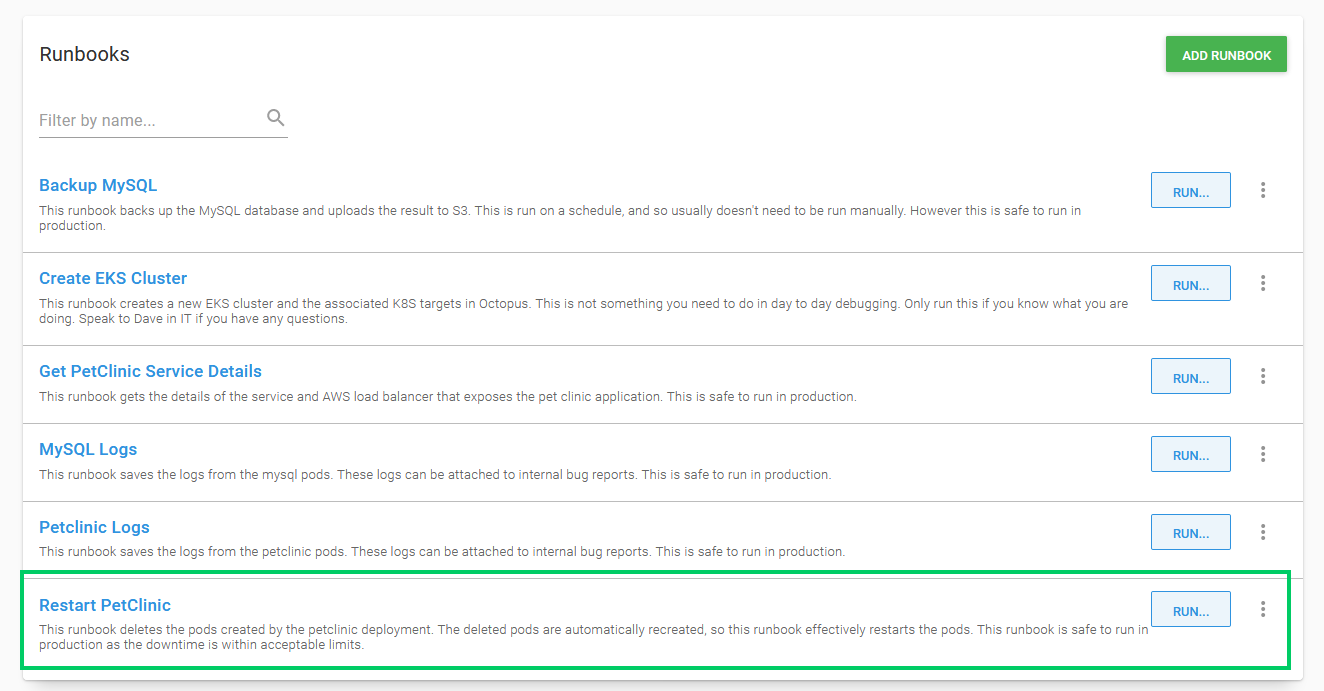 Runbooks with descriptions to help the operations team understand when and where to run them.

Going further, we could use permissions in Octopus to restrict access to runbooks that may require a deeper understanding of the infrastructure to run safely, or use manual interventions to get approval before any action is taken.

Again, this is an example of encapsulating business knowledge in a runbook to reduce the support burden of your infrastructure.

Traditional deployment pipelines end with the deployment, but in reality what happens after a deployment is as critical as the deployment itself. This is where the idea of Continuous Operations comes in. Runbooks gives your team the tools they need to support applications from the first code commit to weeks, months, or years after a production deployment. Because Octopus already understands your infrastructure and how to deploy to it, runbooks can easily take advantage of the existing credentials, targets, and environments to implement the operations stage of the DevOps lifecycle.

Fundamentally, runbooks treat the scripts and workflows that keep deployments running as a valuable product in their own right. Taking the best practices from continuous delivery and extending them to operations tasks ensures that the entire application lifecycle is managed in a cohesive way by your DevOps teams.

With this blog post we end our journey from a locally built legacy Java application to a complete deployment pipeline integrating Jenkins, Octopus, Docker, and AWS EKS. I hope the examples have provided a useful insight into how each of these tools integrates with one another, and that this example pipeline provides a useful foundation on which to implement CI, release management, and operations in your own organization.