Getting started with Channels in Octopus Deploy 3.2

The following are optional, if you want to run the deployments (recommended).

To simulate this real-life scenario we are going to use git-flow as a guideline for our branching strategy, and GitVersion to provide a predictable versioning strategy based on our source repository. If these concepts or tools are new to you, please stop and take a few minutes to familiarize yourself before moving on with this walkthrough.

We have created a sample ASP.NET Web Application that simulates each of the scenarios in the walkthrough.

The following image shows the sample repository using the git-flow branch and tag conventions and an estimation of the versions that will be calculated by GitVersion. Notice the branches and tags control how GitVersion calculates the version for our packages. 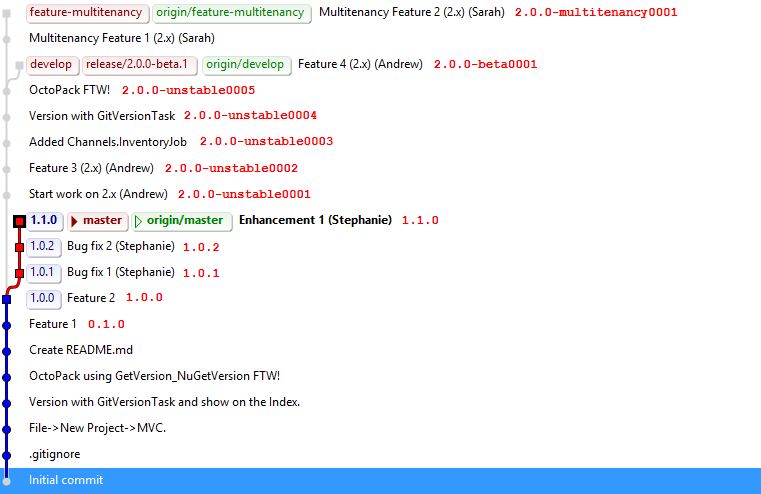 As a starting point, we have built a Process that deploys the Channels.OrderService as an Azure Web App using the Octopus 3.1 support for Azure Steps, and notifies the right Slack channel when the deployment is complete. 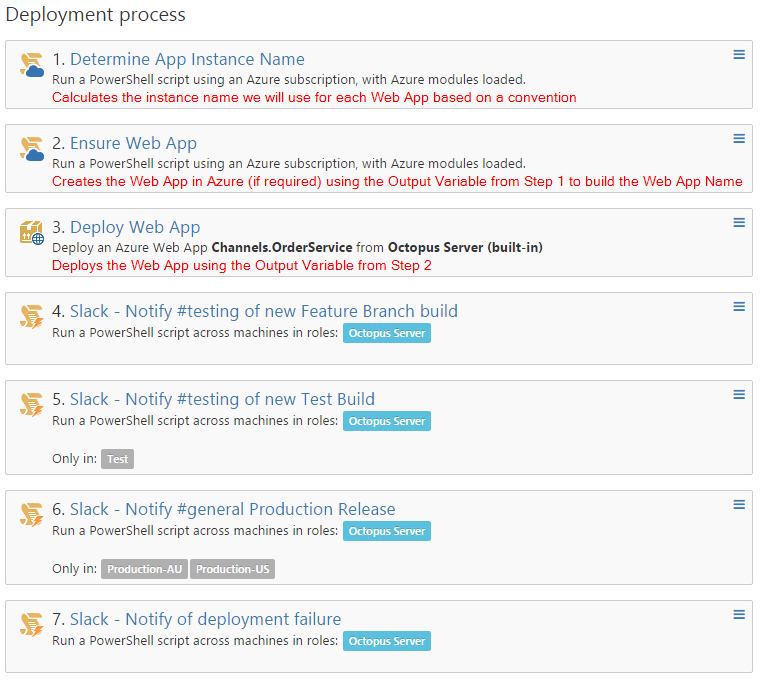 Why so many steps to deploy a simple ASP.NET Application to Azure? In these scenarios we will be introducing several new Web App instances leveraging the dynamic capabilities of Octopus 3.1 Azure Steps - especially feature branches! We want this walkthrough to focus on the Channels features, but feel free to take a deeper look at the sample to see how it works.

Matthew is enhancing and fixing bugs on the latest release of his Company's flagship product. He wants to push his code changes and have them automatically deployed to a Dev environment, and then let his test team promote releases through a Test environment, and finally to deploy releases to Production when they are ready. He also wants to build pre-release packages, but wants to prevent those from being accidentally deployed to Production.

The basic Release Promotion scenario is supported out of the box by Octopus Deploy without the need for Channels. But in this case we want to prevent pre-release packages from being accidentally deployed to Production. Let's modify our Default Channel to prevent creating Releases that would deploy pre-release packages.

Step 1: Prevent pre-release packages from being deployed to Production

Select the Channels tab and click on the Default Channel to edit it. 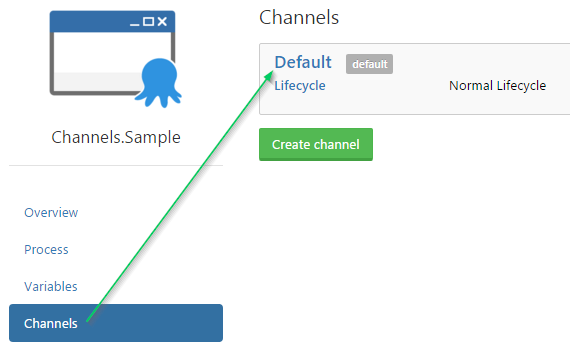 Add a Version Rule for the Deploy Web App step defining a regular expression ^$ to exclude any packages that have any kind of pre-release tag, and save your changes to the Default Channel. These Version Rules can be daunting at first glance, so we've built a designer that makes it easy to tune and test your rules. Take a moment and experiment with the Version Rule designer.

Note: Version Rules will work best when you follow Semantic Versioning (SemVer) for your versioning strategy. 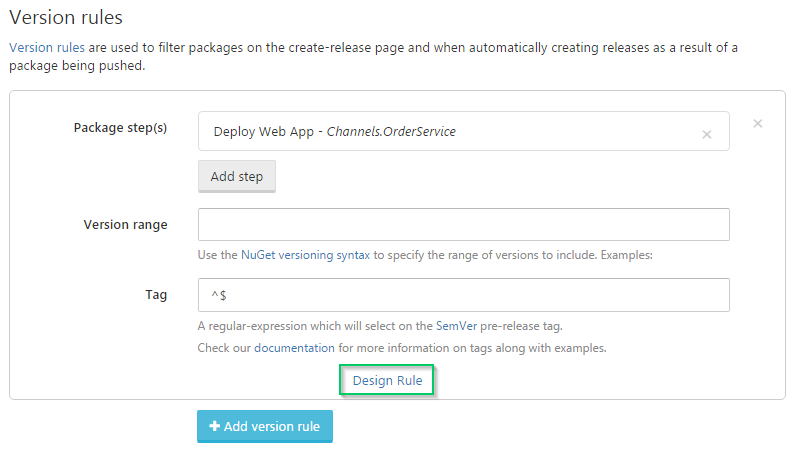 Step 2: Look at the results

Now when you create a Release, the Package for each Step will be selected using the rules you've defined.

Similarly we will filter the Package Search screen to the Channel you've selected for the Release. You can un-check Only this channel to manually override the rules you've defined if necessary.

And if somebody tries to create a Release using packages that don't match the Version Rules they will need to explicitly force Octopus Deploy to create the Release.

Take a few moments to experiment yourself and understand the implications this has when creating Releases.

Create a Release using the 0.1.0 package and watch it deploy through to the Dev Environment. If there are any problems take a few minutes to diagnose it, otherwise drop a comment on this post.

Now promote that Release through to the Test Environment and check your Slack channel. You should have a nice notification informing you of the new release complete with a URL you can click to test your application.

Continue and promote the Release through to both of the Production environments. Now you should have fully deployed 0.1.0 to all Environments. Feel free to do the same with 1.0.0 and experiment with this deployment process, and then move on to Scenario 2 when ready.

Version 1.x has just shipped, and Andrew is starting work on 2.x. As part of 2.x Andrew needs to introduce a new service which needs some new Steps and a handful of new Variables. He would like to start shipping pre-releases as soon as he can. In the meantime Stephanie is enhancing and fixing bugs on Version 1.x, and wants deployments of 1.x to work the same as they always have.

In this scenario we will use Channels to ensure deployments of Version 1.x remain unaffected by our work on Version 2.x deployments. We are going to create a new Channel called 2.x Unstable, and scope the new Steps and Variables to the 2.x Unstable Channel so they only get included in deployments of 2.x. We will also configure Version Rules to make it easier, and safer, to create Releases of either 1.x or 2.x making sure compatible packages are included. Let's get to it! 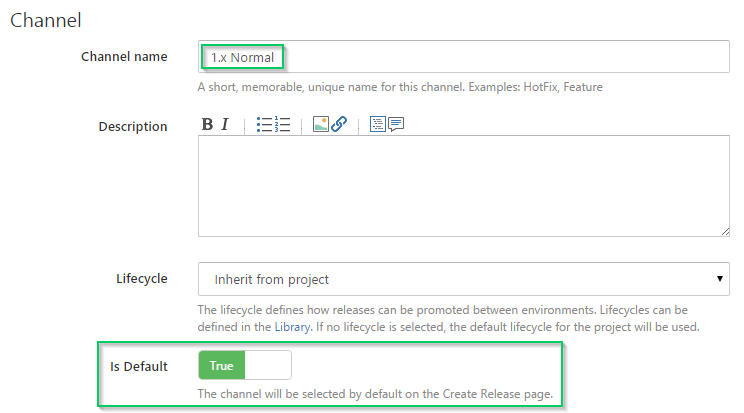 Create a new Lifecycle called Limited to Dev with a single Phase to the Dev environment - need help with this? This will make sure we don't accidentally promote a 2.x Unstable Release to any other Environments.

Create a new Channel called 2.x Unstable linked to the Limited to Dev Lifecycle with a Version Rule for the Deploy Web App Step of 2.0 and ^unstable\d+$. This will make sure we don't accidentally create Releases in the 2.x Unstable Channel using 1.x packages.

Re-order your steps to make sure the Deploy InventoryJob Step is directly after the Deploy WebApp Step.

Modify the 2.x Unstable Channel to include the new Step in the existing Version Rule. This will make sure the Version Rule we created earlier will also be applied to this new Step.

Step 4: Look at the results

Now when you create a Release the Steps are displayed, according to the Channel you've selected, with the latest Packages that match the Channel Version Rules selected by default.

With this configuration the team can continue deploying 1.x and start deploying 2.x without cloning the Project nor compromising their deployment process!

Create a Release using the 2.0.0-unstable0006 packages and let it deploy through to the Dev Environment.

Stephanie has just received an alert that the checkout process in Version 1.x is failing in Production due to a problem with a 3rd party integration. The remedy is a simple code change to the Order Processor service and she wants to deploy an emergency hotfix release to Production without delay.

In this scenario we will configure a 1.x Hotfix Channel that uses a new Lifecycle allowing Releases to be deployed directly to Production, and then back filled into the Dev and Test Environments.

Create a new Lifecycle called Hotfix with two Phases, first to the two Production Environments, and secondly to the Test and Dev Environments.

Add a new Channel called 1.x Hotfix linked to the Hotfix Lifecycle you just created, specifying the same Version Rules as 1.x Normal for the Deploy Web App Step, [1.0,2.0) and ^$.

Create a Release in the 1.x Hotfix Channel using the 1.0.1 package, add some Release Notes using Markdown, and deploy it into both Production environments, one at a time or in parallel - it's up to you. If everything has worked you should see a nice notification in the #general Slack Channel informing you of the hot fix release. Now back fill the Release into the Dev and Test Environments.

Andrew is ready to start sharing early builds of 2.x with a specific group of trusted Beta Customers. He would like to deploy specific pre-release builds to a Beta Environment and notify these Customers of the new pre-release.

In this scenario we will configure a 2.x Beta Channel using another new Lifecycle which deploys Releases directly to a new Beta Environment. We will also configure an Email step and a Variable for the Beta Customer email addresses that is scoped to the 2.x Beta Channel.

We will also make use of the Release Branch concept in git-flow and GitVersion. When we build from source on the release/2.0.0-beta.1 branch we will get packages with the version 2.0.0-beta0001. We will use the well-known beta tag to discriminate which packages should be used to create Releases in the 2.x Beta Channel.

Create a new Environment called Beta, and then add the Octopus Server Tentacle to the Beta Environment.

Add the Beta Environment to the ChannelsSample-Test Azure Account.

Add a new Channel called 2.x Beta linked to the Directly to Beta Lifecycle you just created, specifying this Version Rule for the Deploy Web App and Deploy InventoryJob Steps, 2.0 and ^beta\d+$. This will match packages that were built from git-flow style release branches, with versions like 2.0.0-beta0001 and 2.0.0-beta0002.

Step 4: Include the Deploy InventoryJob Step in Beta Channel deployments

Update the Deploy InventoryJob Step to include the 2.x Beta Channel you just created. This will make sure the step is included in 2.x Unstable and 2.x Beta deployments.

Create a new Variable called BetaCustomerEmailAddresses with the list of email addresses you'll use to simulate your Beta Customers (comma-separated), and set the Scope for this variable to the 2.x Beta Channel you've just created. This will ensure the variable is only available when deploying Releases in the 2.x Beta Channel.

Step 7: Look at the results

Now when Releases are created with the special beta pre-release version tag they will be deployed to the Beta Environment and the Beta Customers will be sent a special email invitation to test the new pre-release of 2.x. 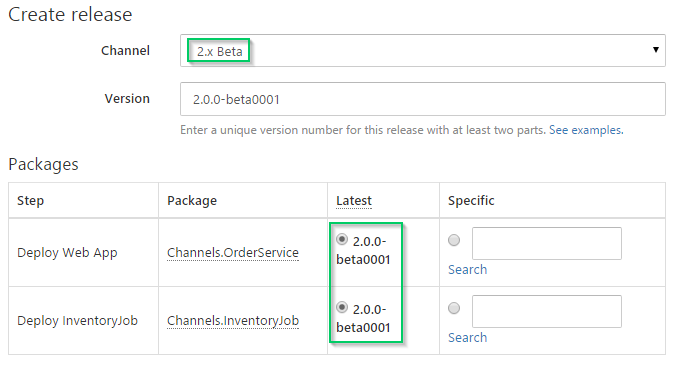 Create a Release using the 2.0.0-beta0001 packages and deploy it to the Beta Environment. If you've configured your SMTP Server settings and some real email addresses you should receive an announcement of the new Beta release.

Sarah is starting work on a new feature for Version 2.x called Multitenancy and she wants to make sure people can test her work as soon as possible without interrupting other work going on in Version 1.x and 2.x.

We will base this scenario on the Feature Branch concept in git-flow and GitVersion. When we build from source on the feature-multitenancy branch we will get packages with the version 2.0.0-multitenancy0001. Since we already use the well-known unstable and beta Tag, we will consider anything else as a feature branch.

We will configure a 2.x Feature Branch Channel using the Limited to Dev Lifecycle we created earlier. The interesting part of this scenario is the amazing development experience we've built using the Octopus 3.1 Azure Steps:

Add a new Channel called 2.x Feature Branch linked to the Limited to Dev Lifecycle, specifying this Version Rule for the Deploy Web App and Deploy InventoryJob Steps, 2.0 and ^(?!beta|unstable).+$. This will match packages that are pre-releases that aren't beta nor unstable.

Step 4: Look at the results

Create a Release using the 2.0.0-multitenancy0001 packages and deploy it to the Dev Environment. If everything works you should see a nice announcement in the #testing Slack channel with the details to start early testing on the new multitenancy feature.